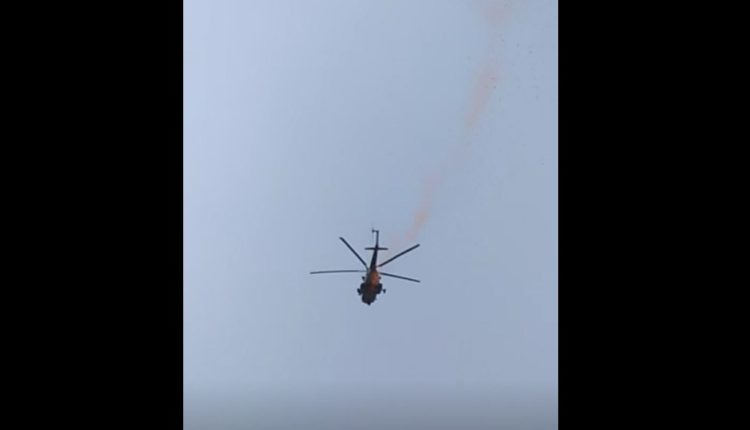 Bhubaneswar: Indian Air Force(IAF) conducted a flypast over Kalinga Institute of Medical Sciences (KIMS) here today to express gratitude towards medical professionals and all other frontline workers in the fight against novel coronavirus.

IAF and Indian Navy helicopters were seen flying over the hospital treating Covid-19 patients and showering floral petals as a tribute to the efforts and the sacrifice of the corona warriors in the battle against the global pandemic.

Similar exercises were performed in other cities of the country also.

The first fly-past was held in Srinagar, capital of Jammu and Kashmir. Afterwards, Delhi’s Rajpath saw a fly-past. An IAF chopper also showered flower petals on the Police War memorial in order to pay tribute to the police officials for their contribution in the fight against Covid-19 pandemic.

Similarly in Haryana, an IAF chopper held a flypast over the Government Hospital in Panchkula. Navy Choppers also showered flower petals on the Goa Medical College in Panaji.

The Indian Air Force’s SU-30 aircraft flew past Marine Drive in Mumbai. Even in Lucknow, the IAF choppers showered flowers over King George Medical College in UP as a tribute to frontline warriors. Even an IAF Chopper was also seen showering flower petals over the Victoria hospital in Bengaluru.

CDS (Chief Defence Staff of India) General Bipin Rawat on Friday had announced that the armed forces will express their gratitude to the coronavirus warriors through various military gestures on Sunday. General Bipin Rawat also said the tri-services including Indian Army, Navy and Air Force will organise various events for the doctors, nurses, police, media, delivery personnel, bank employees, government employees and local store owners as a mark of respect for them.