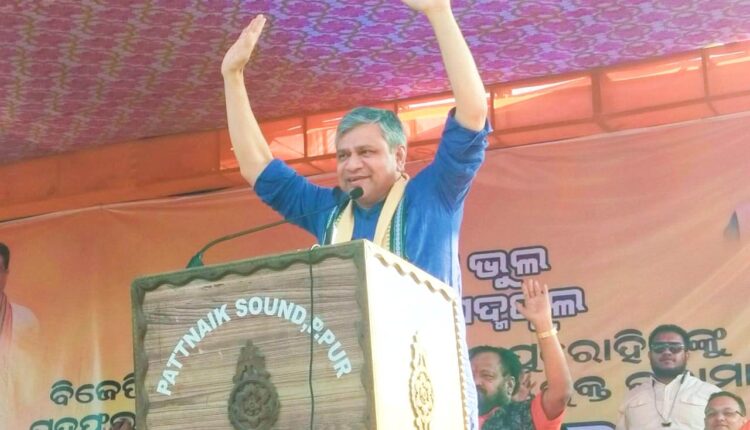 Padampur: The Centre has approved the railway line project from Bargarh to Nuapada via Padampur and there is no shortage of funds for this purpose, said Union Minister of Railways, Communications & Electronics, and Information Technology Ashwini Vaishnaw today while seeking votes for BJP candidate Pradip Purohit for the December 5 by-election here.

“The project has been delayed due to the failure of the state government to provide land for the proposed railway line. If they can allot the land tomorrow then we have no problem to begin the project work the next day,” said the Railway Minister while addressing two public meetings at Padampur and Paikamal in support of the BJP nominee.

The Railway Minister claimed that BJP nominee Purohit has been fighting for the development of Padampur Assembly segment for last many days. Purohit is also working for the welfare of farmers and Kendu leaf pluckers of Padampur, he said.

“Purohit can put pressure on the state government to allot land for the railway project if he is elected in the bypoll,” added the Railway Minister.

Addressing the public meetings in support of Purohit, Union Minister of Agriculture and Farmers’ Welfare Narendra Singh Tomar blamed the state government for delay in the settlement of insurance claims of farmers for crop losses in the Kharif season of 2021.

The Union Minister urged the voters of the constituency to elect Purohit in the by-election. “Purohit is a farmer leader. He has been raising his voice for the farmers since many days,” he said.