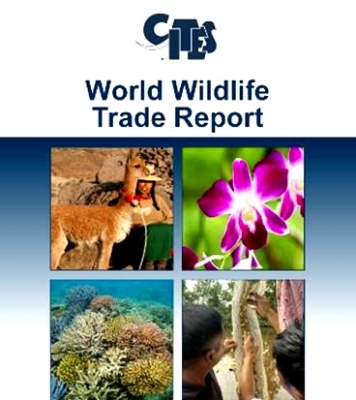 New Delhi: With Asia and Europe represented both the top exporting and importing regions, approximately 3.5 million CITES shipments were reported in direct trade by exporters between 2011 and 2020.

And this amounted to over 1.3 billion individual organisms — 1.26 billion plants and 82 million animals — and an additional 279 million kg of products reported by weight, comprising 86 million kg of animals.

These facts brought to light by the CITES Secretariat that has published the first-ever World Wildlife Trade Report that gives insights and analysis into the global trade in animals and plants that are regulated under this international treaty. It was launched at ongoing World Wildlife Conference in Panama on Tuesday.

CITES is the Convention on International Trade in Endangered Species of Wild Fauna and Flora and it regulates trade in nearly 40,000 species, worldwide.

A total of 183 of the world’s governments (and also the European Union) have agreed to be bound by its terms that aim to stop international trade becoming a threat to the viability of any species it lists.

The report is a joint production involving a partnership of UN organisations and leading conservation organizations: the UN Environment Programme (UNEP), the UN Conference on Trade and Development (UNCTAD), the World Trade Organisation (WTO), along with the International Union for the Conservation of Nature (IUCN) and TRAFFIC.

Asia and Africa are the regions that account for the highest proportion of the estimated value of global exports.

Across all animal commodities, exports of reptiles (particularly crocodiles for skins) and fish (particularly sturgeon for caviar) accounted for over two thirds of the average annual value of global CITES-listed exports.

Across all plant commodities, approximately two thirds of the estimated average annual value of global CITES-listed exports was attributed to timber exports ($6.2 billion), with exports of non-timber plants ($3.17 billion) accounting for the remaining third of global exports by value.

The milestone report is packed with statistics that cover the routes, scale, and patterns of legal, international trade in CITES-listed species, together with the values, conservation impacts, and socio-economic benefits of this trade and the linkages between legal and illegal trade.

The report draws on millions of records, with more than 1.2 million CITES trade permits issued every year. Over 80 pages, it looks into a wide range of trade topics. It is the first report of its kind that is designed to help inform conservation policies and practices for governments, organisations, businesses and trade bodies as well as the media and the public.

It will also contribute to CITES’ global vision, which is that by 2030 all trade in listed species should be legal, traceable and sustainable. The report is having its official launch as part of the World Wildlife Conference or CITES CoP19, which is on this month, in Panama from November 14 to 25.

“Today, the 8 billion people on our planet are consuming millions of products in their daily lives that are derived from wild animals and plants, often without being aware of our relation and interdependency with nature and its web of life. As CITES approaches the 50th anniversary of its signing into being in Washington D.C. on March 3, 1973, it is timely to have a clearer picture of the global wildlife trade regulated under the Convention,” says Ivonne Higuero, the CITES Secretary-General.

These species, regulated by CITES, include, among others, high value marine fish and timber species. The majority of the nearly 40,000 under its trade control regime is plants.

Ivonne Higuero believes that good data can inform effective action for the conservation of endangered species, “We thought it would be helpful to document the scale and other patterns of the trade as well as the many values of the trade in wild species of animals and plants and reinforce the calls for more investment in nature and addressing the biodiversity crisis.”

The report also shows that the proportion of wild-sourced plants in trade has further decreased over the past 10-year period to merely four per cent in terms of the number of individual plants.

In other words, vast majority of plants in trade are artificially propagated and are no longer ‘wild’.

This major shift is happening to animal species, too, and CITES will continually monitor this situation with the intention of publishing its data in future editions of the World Wildlife Trade Report.