Binode and the Banyan Tree 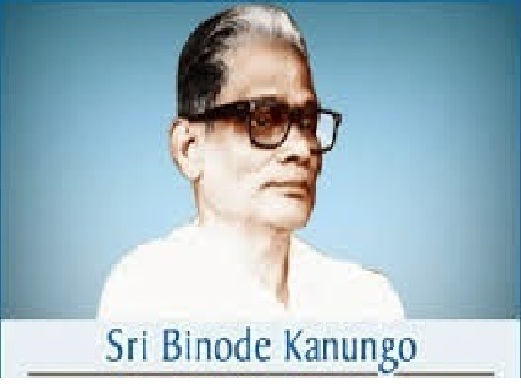 Banyan tree, in Indian culture, has always been associated with knowledge. And it is a matter of coincidence that the compiler of the one and only Odia Encyclopaedia’ Gnan Mandal’, Padma Shri Binode Kanungo, had fought 1952 Odisha Vidhan Sabha elections on the symbol – ‘Banyan Tree’. Known for his extensive work in the field of mass education, the hallmark of Kanungo’s works was the way he could explain the complex technical subjects for the common reader in the simplest possible language. All his books are immensely popular today.

Born on 6th June 1912 in the village Mallipur in the undivided Katak district, Binode left his studies to join the freedom struggle, when he was only in his 9th standard at Ravenshaw Collegiate School. After the country became independent, he fought the first General Elections to Odisha Assembly in 1952 from Kisan Nagar on Socialist Party’s ticket against a Congress stalwart named Raj Krushna Bose. The symbol on which he fought, was the one allotted to the Socialist party – the ‘Banyan Tree’.

It was a tough fight at Kishan nagar. Although there were three candidates in the fray, the contest was primarily between Raj Krushna and Binode. Bose had so much influence in the constituency that not many were coming forward to campaign against him. Binode babu was fighting only with the help of young volunteers, who were idealistic yet highly inexperienced. The volunteers were greatly motivated when Socialist leader Jai Prakash Narain, accompanied by his wife Prabhavati Devi came to conduct election meetings in Kisan Nagar. There was a lot of spontaneous support from the common people. But it was the experienced Raj Krushna Bose, who finally won the elections. He defeated Binode Kanungo by a margin of 2415 votes. In the final tally, Raj Krushna got 13,883 votes, Binode got 11,468 and the independent candidate got 3235.

After the defeat in his maiden electoral battle, Binode was obviously very upset. Surendra Mohanty,the famous Odia writer, has very sensitively described the mental state of Binode babu at that time in one of his write ups in a commemorative volume published during Binode Kanungo’s first death anniversary in 1991.

Binode babu was sitting in the office of Madhu Mohanty, the then Editor of weekly ‘Observer’. Madhu Mohanty asked ‘Don’t lose heart Binode. You must immediately start working in Kishan Nagar for the next term.’ Binode babu was silent. He was simply turning the paper weight, taking it from one hand to the other. It seemed he was engrossed in some deep thought. After some time he told, ‘I have decided to quit politics.’ ‘ But what are you going to do after that?’ Madhu Mohanty asked. Binode Babu’s reply was clear. ‘I would focus on my new project to compile the first ever Encyclopedia in Odia.’

Binode babu has not looked back after that. He immediately started the work and put his everything into the Gnan Mandal project, the first volume of which was released on the 2nd December 1960 by Harekrushna Mahatab, the then Chief Minister of Odisha.

Binode Kanungo lost the elections and withdrew from active politics, depriving Odisha Vidhan Sabha of a leader of his stature. But, in return the Odias got their Gnana Mandal, the great Banyan Tree of knowledge, we all are proud of today.