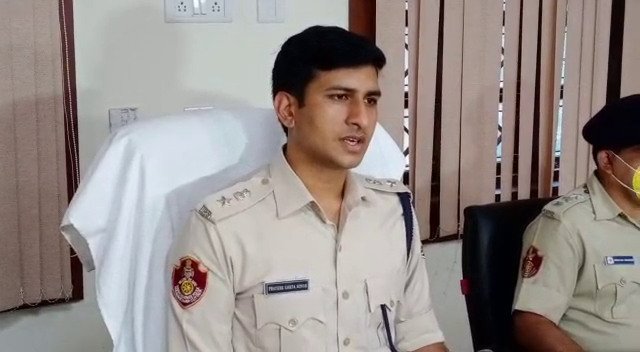 Cuttack: Cracking the murder case of a migrant worker, who was found dead on Mahanadi riverbed near Bhuasuni Peetha under Bidanasi police station earlier this month, the Commissionerate Police (CP) today revealed that the 28-year-old from Bihar was killed over illicit affair.

At a presser, Cuttack DCP Prateek Singh said two persons, including prime accused Munnilal Sharma have been arrested in this case and search operation is underway to nab another accused identified as Pankaj Yadav, who had given ‘supari’ to Munnilal to eliminate Azad Yadav.

Sharing details, the DCP said a missing complaint was lodged at Saheed Nagar police station on February 26.A day after, Azad had come to Cuttack to meet Munnilal at Chauliaganj area here collect some dues. However, he later went missing. Later, his blood stained body was recovered from Bidanasi police station area on March 3.

Since Munnilal was absconding after the incident,  police suspected his involvement and launched a manhunt to trace him forming a special team. Acting on a tip-off about movement of Munnilal in Badambadi bus stand area, the police swung into action and arrested him today. During interrogation he confessed to his crime.

“The deceased had developed an illicit relationship with Pankaj’s wife and had even taken her to Bihar last year. After knowing their illicit relationship, the village administration there held a meeting and asked them to return to Odisha. However, Pankaj had held a grudge against Azad. He later gave ‘supari’ to Munnilal for killing him with a total deal of Rs 40,000. Pankaj had given Rs 20,000 in advance and promised to pay the remaining amount after execution of the murder,” said the senior cop.

The main accused had later hired Kailash to commit the crime.

“Munnilal called Azad and asked him to meet him in Cuttack for clearance of dues. The two later sat at a place near Bhuasuni Peetha to consume liquor. Later, Munnilal attacked him with a broken liquor bottle. Though Azad tried to escape the spot, the accused chased the former and later stoned him to death,” the DCP added.

ISRO to launch constellation of 75 student satellites in a year