The Enforcement Directorate (ED), which is conducting raids at multiple locations across the nation in connection with a prevention of money laundering case pertaining to mining and extortion in Jharkhand on Wednesday, has recovered AK-47 from the premises of one of the accused. 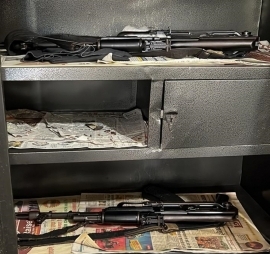 New Delhi: The Enforcement Directorate (ED), which is conducting raids at multiple locations across the nation in connection with a prevention of money laundering case pertaining to mining and extortion in Jharkhand on Wednesday, has recovered AK-47 from the premises of one of the accused.

Sources claimed that AK-47 was recovered from the premises of middleman Prem Prakash.

The ED will inform the local police about this so that the law enforcement agency can decide on the future course of action.

The raids were being conducted in Tamil Nadu, Bihar, Jharkhand and in Delhi-NCR.

Pankaj Mishra, a close aide of Jharkhand Chief Minister Hemant Soren, was placed under arrest by the ED on July 19. During his questioning, the ED gathered a lot of inputs.

The ED had even seized one inland vessel worth Rs 30 crore, namely M.V.Infralink- III, which was allegedly being used by Mishra.

The official said that an FIR was lodged in this respect with Muffasil police station against the owner of the vessel MV INFRALINK-III under Section 25, 30 of Bengal Ferries Act, and sections 188, 282, 420 of IPC.

This was preceded by freezing of two illegally operated stone crushers of MaaAmba Stone Works operated by Bishnu Yadav and Pavitra Yadav along with freezing of three HYVA trucks found at Mauza Majhikola, Sahebganj carrying illegally quarried stone chips, boulders without having any mining challans.

In the similar manner, an FIR in this regard was lodged under Section 379, 414 of IPC at Girwabadi, Sahebganj Police Station.

“Besides, one illegal mine situated at Mauza Simaria, Sahebganj operated by Bishnu Yadav and others has been identified. Another mine has been identified at Mauza Demba, Sahebganj where mining has exceeded far beyond the leased area. The quantification of the excess illegal mining done at the above site has been estimated around 37.5 million cubic feet, which has remained undeclared and concealed. The processed value of the mined stone chips is estimated to be around Rs 45 crore,” the official had said.