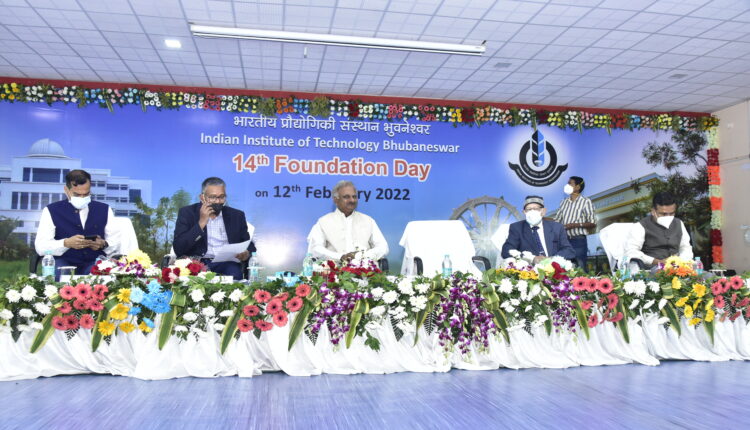 He said that International collaboration is the order of the day. It can be enabled through NKN. Nuclear power can be utilized for rural developments and advancement of technology. He further said that the Institute should learn from the culture and the way of doing research from the senior scientists of the country. He credited the director for his visionary approach, new ideas, future plans, leadership, tireless efforts and sheer determination which led the Institute to scale new heights.

Prof Dhanush Dhari Misra, former Chairman BOG, IIT (ISM) Dhanbad graced as the Guest of Honour on the occasion. The event was presided over by Prof RV Raja Kumar, Director, IIT Bhubaneswar. The event was organized in hybrid more with physical presence as well as virtual presence of the fraternity and guests.

Prof Raja Kumar briefly highlighted the journey of the institute and the rapid strides it is making in its development.

“The foundation stone for the institute was laid on February 12, 2009 where a modern new age IIT is standing at the advanced stages of completing its 2nd phase of constructions. The institute made its first shifting to the permanent campus on July 18, 20015 and completed the shifting by February 14, 2018. The campus was dedicated to the nation by Prime Minister Narendra Modi, on December 24, 2018. The campus has clean and green environment and has grown to uniquely offer single seated accommodations to its students, despite having the 2nd largest student strength amongst the 2nd generation IIT’s,” said Prof Raja Kumar.

While speaking about the recent achievements at the institute, he said, “in its commitment to provide education on par with the cream of global standards, the institute brought its students in batches to the campus most of them by Sept 2021, ensured vaccination of all and initiated running classes with physical presence from Sept 2021.In the student placements including median pay packages there is a rise to the tune of 15-20 rise over the last year and these are on par with the best of the senior IIT’s. As of now 80 and 60% of undergraduate and postgraduate students are already placed”.

On highlighting some R&D efforts, Prof Kumar said, “IIT Bhubaneswar received its first set of semiconductor integrated circuit designed at the instituted and fabricated at SCL, Chandigarh, and some waiting delivery from fabsof TSMC, Taiwan. The institute is confident of assuring the industry about the availability of the expertise in chip designs as well as process technology in Odisha, now. Similarly in the area of augmented and virtual reality too the institute has been engaged to help creating an ecosystem of research, technology and entrepreneurship development besides several areas