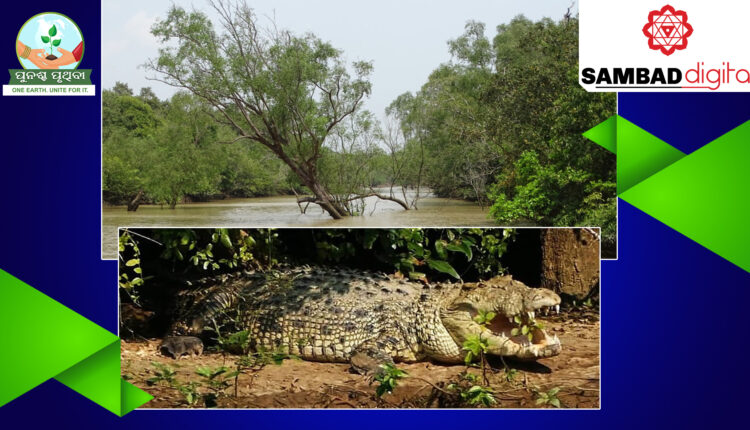 Several panchayats of Kendrapada district are in turmoil over the construction of a mega pipeline to divert water from Kharasrota- a tributary of Brahmani- towards several gram-panchayats in the neighbouring Bhadrak district. Uniting under the banner of Kharasrota Banchao Sangharsh Samiti, the villagers from these panchayats are protesting the construction work of this pipeline, which will lead to increase in salinity and decrease availability of the river water, on which locals are reliant. The increase in salinity will also have a significant impact on Bhitarkanika Mangroves and possibly increase human-animal conflicts with crocodiles, which inhabit the river.

A notable activist and member of the Bhitarkanika Eco-Sensitive Zone Monitoring Committee, Srikant Nayak is undertaking a hunger strike, which is on its 21st day. During the course of protests locals and police clashed, after which the police sought to criminalise these protests: arresting and filing cases against several persons. In this piece we hope to provide a rights and social movement perspective to this agitation, and situate it in the broader trend of environmental misgovernance in Odisha and India.

The legal and regulatory background: attempt to scuttle environmental provisions

There seems to be a keen design to scuttle regulatory provisions which apply to this case. The district officials claim that the project is a linear project: in the nature of roads, highways, transmission lines etc, which passes through several areas, and therefore not subject to the rigorous Environmental and Social Impact Assessment provisions envisioned in the ESIA policy, which is a prerequisite for grant of Environmental Clearance from the MoEF. Linear projects are exempt from the rigours of Environmental clearance according to amendments brought to these policies in 2002 and 2013 by the MoEF, Government of India. While these amendments themselves are widely critiqued, they were aimed at facilitating construction of roads and developmental facilities through impregnable forest areas, made difficult by threats of Left Wing Extremism (LWE). Even so, the Supreme Court has also expressed horror at these amendments, expressing an intention to give out detailed guidelines to undo them.

Even so, there are two direct rebuttals to the government’s argument. First, the problem at Kharasrota is not with the pipeline part of the project, but with the diversion of river water which feeds the ecologically sensitive zone of Bhitarkanika. Therefore the issue here is not the passing of the pipeline itself, but the diversion of water resources from this sensitive area which has significant localised ecological consequences in one area. The rationale behind exemption of linear projects like roads or transmissions pipelines was that they do involve similar impact on resources or substantial change in natural habitat of one particular area– dispersed as such projects are across a longer linear area. This exemption just does not apply to Kharasrota diversion of river water. This false equivalence is an attempt to provide a legal cover to an ecologically dangerous act.

Second, the Environmental and Social Impact assessment is particularly crucial in this area, as it has been notified as an Eco-Sensitive Zone by the Central government. All developmental activities, even highways and pipelines (less than 100 kms) in eco-sensitive zones are categorised as ‘Category A’ projects in the Environmental and Social Impact policy, 2006 and are subject to strict assessment and environmental clearance. This rule has not been changed by the aforementioned amendments. The assessment for Category A projects involves public hearings and appraisal by the Central Level Expert Appraisal Committee. A public announcement of this pipeline, public hearing or Central Level Expert Appraisal has not been done in this case. These hearings are crucial to generate public confidence and understand the impact of this project on local residents. As the movement intensifies there is a redoubled need for a public hearing to solve this problem.

Bhitarkanika (comprising several villages of Bhadrak and Kendrapada districts) has been designated an eco-sensitive zone by the Central Government, therefore strict restrictions on developmental projects apply to this region. The Eco-Sensitive Zone Monitoring Committee of Bhitarkanika is a committee empowered by the Central Government to monitor compliance of environmental clearances and to ensure compliance with the regulations of eco-sensitive zones. It has a proactive role in scrutinising activities, both where Central Environmental Clearance applies and where they do not apply. After scrutiny it refers projects to the Central Government or concerned regulatory agencies for approval. However, this present case shows how this important monitoring agency was used as a rubber-stamp by the government. The records of the meeting accessed by the authors paint a story of hasty decision-making which frustrates the purpose of the committee. The meeting held on 15.12.2020 convened by the Collector of Kendrapda was conspicuous by the absence of two members: an expert on ecology and a representative of the MoEF, Government of India. The only independent non-state government member on the panel was Srikant Nayak, the NGO representative, who voiced concerns of Bhitarkanika’s ecological diversity. As a result, the meeting became a rubber-stamp for what the State government had already planned.

We can see through the minutes that the Monitoring Committee, which is empowered to refer projects to MoEF and other regulatory agencies for Environmental clearance, merely gave post-facto approval to an EIA report already prepared by the State government. It was claimed in the meeting that IIT-Hyderabad had conducted the Environmental and Social Impact Assessment for the government and had approved of the project. However, this is not supported by locals who claim that no such public hearings in the course of this social impact assessment report were conducted, and even if conducted they were unaware of it. The hearings of this nature are normally to be conducted by the State Pollution Control Board and well publicised in local newspapers, which has clearly not happened in this case. Additionally, the Monitoring Committee has the power to refer the project to these regulatory authorities. In accordance with this, the NGO member of the Monitoring Committee, Srikant Nayak placed on record his demand for a national-level committee to probe the concerns of damage to Bhitarkanika mangroves. This was not honoured by this sham “monitoring committee” comprising exclusively of officials, who are today enforcing the construction of the pipeline. Instead, the records reflect that this ESIA report was given post-facto approval by the Monitoring Committee. This kind of hasty monitoring, which frustrates the very idea of having these independent local regulatory bodies is increasingly becoming the norm in Odisha. Last year, the Talabira mine controversy saw similar hastily made and allegedly forged gram sabha resolutions filed by the district administration.

Next, it was also claimed by the government in the ESZ meeting that NGT had given a go-ahead to the project after hearing concerns about it. This is far from the truth. The NGT order was on a petition which had alleged ecological issues in Bhitarkanika due to the diversion of water. The procedural irregularities highlighted in this article were not scrutinized by the NGT, nor was it ruling on these questions. The NGT merely took the report of a committee of officials on record and noted that no specific allegations of irregularity was made by the petitioner, hence it was disposing of the matter. Thus, the reliance placed on the NGT order to argue that the project and whole host of procedural irregularities are vindicated is patently false.

The need of the hour instead is to adhere to the 4-step EIA process and conduct public hearings and expert appraisals. That is the only way the truth about the ecological and social impact can be assessed. NGT order was a judicial body, ruling on a limited question: it cannot be taken as a substitute for mandatory assessment given by the statutes and EIA policy.

On the 12th of August, hundreds of locals took out a protest against the project- on grounds of it being detrimental to agriculture as well as to the biodiversity of the area. As previously mentioned– multiple experts have voiced concerns over the ecological impact on the Bhitarakanika mangroves with the change of the quantity of freshwater that will now flow into them. Apart from agriculture, the project would also adversely affect human-crocodile conflicts. The protests had finally taken a violent turn.

Srikant Nayak, a local social worker and environmental activist, is now into his 21st day of a hunger strike. He has written an open letter to the PCCF asking for an immediate halt on construction activities until a committee of experts can further examine the effects of this project on Bhitarkanika. Many of his concerns have been highlighted above. While some district authorities have met Srikant, none of them have been able to give any assurance of a halting and examining of the project. Meanwhile, a delegation of social and environmental activists met the Chief Forest Conservator almost a week ago to inform him of the happenings and the issues of locals. While the officer took cognisance of what the delegation had to say, there has been no follow up action on the project.

Srikant as of today is admitted in the SCB Medical College and Hospital, Cuttack. As of now, his and the larger protests still remain to be highlighted nationally, and acknowledged by state and national leadership.

From an examination of the ESIA report purportedly made by IIT Hyderabad, it is quite clear that both the social and environmental assessment of the project are lacking. The project is being treated in isolation of its direct effects on the mangroves and biodiversity of the Bhitarakanika region, which clearly cannot be the case. The reduction in freshwater supply is disastrous to any mangrove region.

The social assessment has also been skimmed over– neither have the public hearings taken place nor have the locals had a say in this project. In the name of social impact assessment, the report only suggests measures for rehabilitation and redress of populations affected by it. This is not the meaning of social impact assessment envisioned in Indian Environment laws. The problematics of how this will reduce the existing water supply for villages and agriculture has not been addressed. Nor have concerns of an increase in human-alligator encounters been accommodated for. The locals claim that construction of a barrage will help alleviate some of the problems by ensuring a minimum supply of fresh water to the region. This is an important suggestion, but there is no way of solving and ascertaining this issue unless a proper Impact Assessment under Indian Environmental laws is carried out.

Thus, this article re-asserts Srikant’s demands in his open letter to halt any further construction till a rigorous environmental and also social impact of the project can happen in public scrutiny. This project falls into the trend of normalising skirting environmental laws in the name of ill-planned development.

NINL disinvestment likely to be completed by Dec