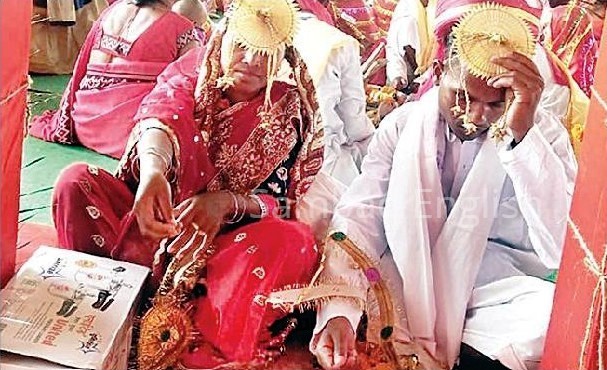 Malkangiri: Love can happen anytime anywhere. Two Maoists, who were active members in a banned outfit, fell in love with each other during their mission and tied the nuptial knot to live rest of the life together.

Mada Madkami (22), a former Area Committee Member (ACM) of CPI-Maoist at Katekalyan area in the state of Chhattisgarh, married Kuharani Aite, a Maoist cadre at Mahupadar in Malkangiri district, as per Hindu rituals in presence of police on Tuesday.

According to reports, the duo was in love with each other while they were active for their mission. Fearing obstacles by other Maoists in the organisation, the couple decided to leave the path of violence and to join the mainstream in society.

As per their decision, Madkami surrendered before Katekalyan police in Chhattisgarh and Kuharani followed the same in Odisha. Following their move, the police and administrations of both the states facilitated them to join the mainstream.

By the efforts of police, the wedding of Maoist couple was conducted in a grand way at Dantewada in Chhattisgarh.

Police sources said that Madkami had bounty of Rs 5 lakh on his head and Kuharani was carrying Rs 1 lakh on her head. Both were involved in many violence in Chhattisgarh and Odisha.

However, the police and administration supported them to return to the mainstream. After their marriage, they have been provided financial assistance and a plot to live rest of their life in peace and harmony.