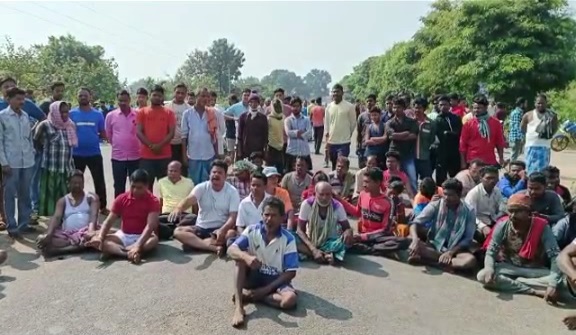 Bhubaneswar: Locals blocked Barang-Chandaka Road as a villager died after being hit by a garbage-laden truck engaged by the Bhubaneswar Municipal Corporation (BMC) at Daruthenga area on the city’s outskirts this morning.

The deceased has been identified as Rama Chandra Gagarai (46), a resident of Daruthenga village.

According to reports, the BMC’s garbage truck en route Bhuasuni dumping yard ran over the villager while he was travelling on a bicycle today morning. He died on the spot.

Earlier in August, a villager was killed on the Chandaka road after being hit by a BMC’s garbage truck. The incident had sparked tension among the residents of Daruthenga village. Today’s incident added fuel to the fire.

The protesters alleged that the vehicles engaged by the BMC for dumping garbage at Bhuasuni yard lack fitness and unexperienced drivers are engaged to operate the vehicles. Terming the accident as a ‘murder’, they alleged the BMC of conspiring to kill residents of Daruthenga one after the other.

The villagers demanded the collector, mayor and BMC Commissioner to intervene into the matter and take appropriate step to prevent accidents by the BMC vehicles on Chandaka Road that connects Khordha and Cuttack. They threatened that the BMC’s garbage trucks will not be allowed to the dumping yard if their demand is not met.

Gopashtami 2022 Date, Tithi, Significance and all you need to know