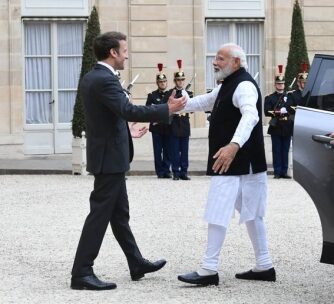 New Delhi: Prime Minister Narendra Modi paid visit to France on Wednesday on his way back from the second India-Nordic Summit in Copenhagen.

In Paris, Prime Minister Modi and French President Emmanuel Macron held meeting in one-on-one and delegation level formats where they discussed wide range of issues including situation in Ukraine and Afghanistan.

The two leaders also took stock of the regional and global security outlook and discussed ways to work together in making the India- France Strategic Partnership a force for global good.

During meeting, France reiterates its strong condemnation of the unlawful and unprovoked aggression against Ukraine by Russian Forces.

India and France expressed serious concern at the ongoing conflict and humanitarian crisis in Ukraine.

They “unequivocally” condemned civilian deaths in Ukraine and called for an immediate cessation of hostilities to bring parties together to promote dialogue and diplomacy to find an immediate end to the suffering of the people.

Both countries underlined the need to respect UN Charter, international law and the sovereignty and territorial integrity of states.

The two leaders discussed the regional and global implications of the conflict in Ukraine and agreed to intensify coordination on the issue.

Further, India and France express deep concern about the current aggravation of global food security and nutrition, already impacted by the Covid-19 pandemic, and especially in developing countries.

“The two countries are committed to enabling a coordinated, multilateral response to address the risk of aggravated food crisis because of the conflict in Ukraine, including through initiatives such as the Food and Agriculture Resilience Mission (FARM), which aims at ensuring well-functioning markets, solidarity and long-term resilience,” reads a statement.

On Afghanistan, India and France expressed serious concern on the humanitarian situation and violation of human rights and reiterated strong support for a peaceful, secure and stable Afghanistan, emphasizing respect for its sovereignty, unity and territorial integrity and non-interference in its internal affairs.

They called for an inclusive and representative government, and respect for the rights of women, children and minorities.

Both the countries also reaffirmed the UNSC Resolution 2593 (2021) and emphasised on zero tolerance for the use of Afghan territory for spreading terrorism in other parts of the world, and agreed to work together in this regard, including at the UN Security Council.

Meanwhile, maritime cooperation between India and France has “reached new levels of trust and will continue through exercises, exchanges and joint endeavours throughout the Indian Ocean”.