Odisha had special place in the heart of Mahatma Gandhi: CM Naveen

To marks 100 years of Gandhi's first visit to Odisha, various programmes at all levels were organised across the state today. 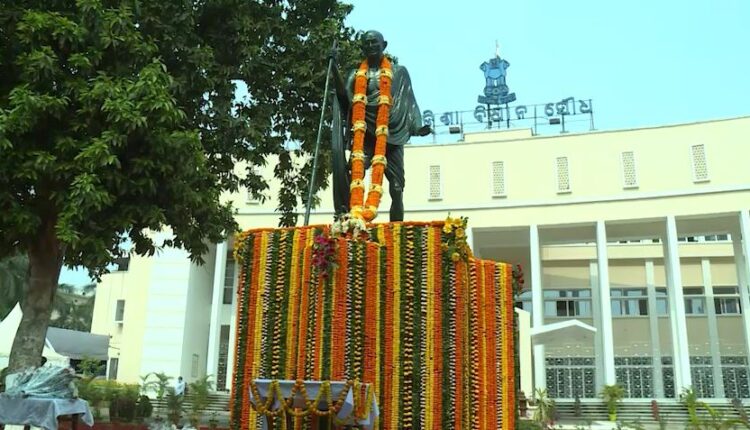 Cuttack: On this day in 1921, Mahatma Gandhi arrived in Cuttack on a seven-day visit to Odisha to propagate his ideas about Non-cooperation Movement against the British rule.

To marks 100 years of Gandhi’s first visit to Odisha, various programmes at all levels were organised across the state today.

In Cuttack, a Padyatra was taken out from the Railway Station to Belleview Square with hundreds of people of all walks of life, including leaders cutting across party lines in attendance. Assembly Speaker Surjya Narayan Patro, Ministers Ashok Chandra Panda and Samir Ranjan Dash, local MP Bhartruhari Mahtab and MLA Mohammed Moquim, PCC President Niranjan Patnaik and BJD MLA Debi Prasad Mishra joined the Padayatra that covered a distance of seven kilometre.

On the other hand, members of the Odisha Legislative Assembly (OLA) of all parties paid floral tribute to the statue of Gandhi on the Assembly premises. On the occasion, House proceedings, including the Question Hour,  was cancelled in the first half of the day and discussion was held on a resolution brought by Culture Minister Jyoti Prakash Panigrahi to mark 100 years of Gandhi’s first arrival in Odisha.

During discussion on the resolution, Chief Minister Naveen Patnaik said, “Odisha had a special place in the heart of Mahatma Gandhi, who visited the state eight times.”

I am glad that the August Assembly is commemorating the 100th anniversary of Gandhi’s first visit to Odisha on March 23, 1921.

During his visits to Odisha, Mahatma Gandhi had extensively travelled in different parts of the State and interacted with cross sections of the people. He took many Padayatras through which he became very close to the hearts of people of Odisha.

Patnaik further said, “his visits created greater awareness about various social issues apart from energizing the freedom movement. In the present global scenario of increasing polarisation and divisiveness, Gandhi’s commitment to pluralism and his message of tolerance and harmony is relevant now as it was then.”

How the people of Odisha judiciously blended their linguistic, regional aspirations with the national goal was a brilliant case study. I take this opportunity to say that my Government is totally committed to the Principles and ideals of Mahatma Gandhi. Renaming our Secretariat as ‘Loka Seba Bhawan’ was not a symbolism. It is our Article of Faith.

Quoting Gandhi-the Talisman, the CM said,  “I will give you a talisman. Whenever you are in doubt, or when the self becomes too much with you, apply the following test. Recall the face of the poorest and the weakest man whom you may have seen and ask yourself, if the step you contemplate is going to be of any use to him. Will he gain anything by it? Will it restore him to a control over his own life and destiny? In other words, will it lead to Swaraj for the hungry and spiritually starving millions?”

COVID vaccine: People above 45 years of age to be vaccinated from April 1