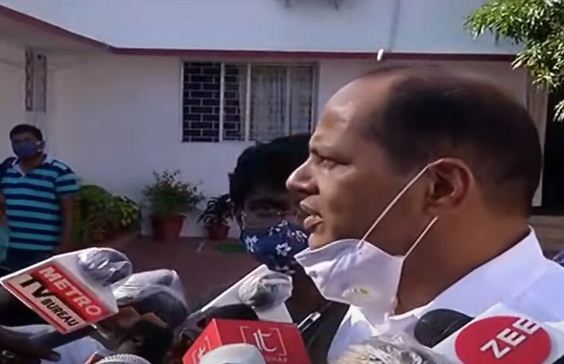 Bhubaneswar: Hours after Gopalpur MLA Pradeep Panigrahi was today expelled from the primary membership of the ruling Biju Janata Dal (BJD) over alleged anti-people activities, the legislator at a press conference here refuted the allegations.

“I am not involved in any kind of anti-people activities. The party should clarify as to what kind of activities it is referring to and also present proof in this regard,” said Panigrahi.

The MLA said he has dedicatedly carried out all responsibilities entrusted upon him by the party in the past. “I was given the charge of 15 assembly seats, out of which the BJD won in 12 constituencies,” he said.

While it is being speculated that the action was taken against Panigrahi over his alleged association with arrested and suspended IFS officer Abhay Kant Pathak and his son Akash Kumar Pathak, Panigrahi said the bureaucrat is an efficient officer and proof supporting the allegations against the officer should be brought to fore.

The father-son duo has been arrested by the Odisha Vigilance for amassing assets worth crores disproportionate to their known sources of income. Worth mentioning, Akash was slated to marry the daughter of Panigrahi in December.

“Akash was working in Romania but returned to Odisha to look after his ailing mother. He had scored highest mark in GMAT in the year 2016 and was selected for the Tata Group,” the legislator said.

However, Tata Motors Limited (TML) has lodged a complaint with the Crime Branch of Odisha Police against Akash Kumar Pathak accusing him of committing cheating, forgery and impersonating as the Managing Director of the company.

Notably, the bureaucrat was found in possession of disproportionate assets of Rs 9,35,42,594 beyond his known sources of income (435% of total income from all known sources), which he could not account for satisfactorily.