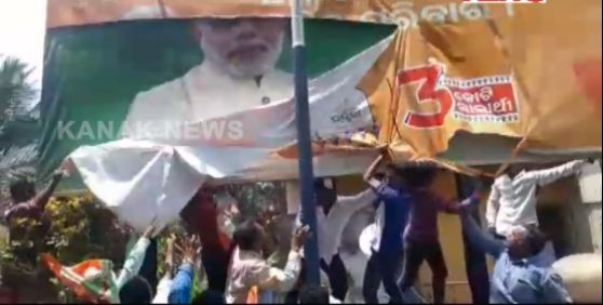 A number of activists were engaged in tearing down the hoarding featuring PM Modi shouting the slogan ‘BJP Down Down’.

The frequent price hike in fuel and petroleum products in the past few days triggered protests by the political parties across Odisha.

The ruling BJD on Saturday had staged demonstration for three hours at various petrol pumps against the price hike of petrol and diesel.

The party alleged that the central government has failed to take steps to reduce the price of the petroleum products.

Reacting to the protest, state unit of BJP said that Odisha CM Naveen Patnaik should press for inclusion of the petroleum products under the ambit of Goods and Service Tax (GST).

“While the central government slashed tax on the fuel, the state government did not do so for the benefit of the public and it is protesting against the fuel price hike,” BJP said.

“It should request the GST council to include the petroleum products under GST ambit,” BJP state general secretary Bhrugu Buxipatra told media.