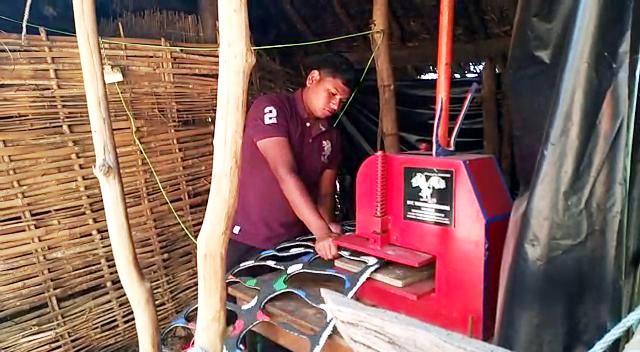 Kishore said due to financial constraints of his family, he could not opt for higher studies after completing Plus Two Science. However, he hopes to become self-sufficient by running a successful slipper manufacturing unit.

Similar were the stories of his friends Ganeswar  and Niranjan. Ganeswar, who could not clear Plus Two Arts, was sitting idle after completing ITI. He also worked as a salesman in a shop in Telkoi market for some days whereas Niranjan was earlier doing farming and running a grocery shop to eke out a living after his Matriculation.

After getting to know about the machine and watching its video on YouTube, both of them purchased it from Gujarat around 10 days back and started the manufacturing business. Now, all the three youth  are sweating out hard manufacturing slippers for a living. Each person is now making minimum 50 pairs of the footwear per day to earn between Rs 500 and Rs 700 per day.

Meanwhile, locals opined that the state Government should come forward to incentivise such persons to promote startups in the state.

Steve Jobs to be conferred with posthumous Presidential Medal of Freedom