Sources said Rudra been seen running over 5-6 km daily since he was three years old. He is often seen practising with his maternal grandfather B Rabindra who was a police constable and also a football player. 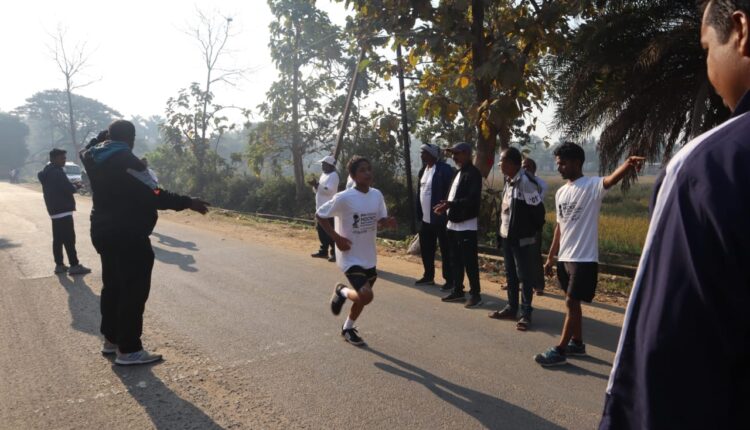 Malkangiri: Odisha’s marathon boy Budhia Singh, who ran a record-breaking 65 km from Puri to Bhubaneswar at the age of four in 2006 and went on to clinch a place in the Limca Book of Records, now seems to have another counterpart from Malkangiri district who recently grabbed the limelight with his agility. Now being tagged as Malkangiri’s Budhia Singh, six-year-old Tanush Prasad Sethy, also known as Rudra, caught everyone’s attention as he ran 17 km as part of a marathon organised by the district administration as part of Malyabanta Mahotsav recently.

As per reports, Rudra, who is a Class I student at Malkangiri Kendriya Vidyalaya, took everyone by surprise as he ran the marathon uninterrupted and surpassed others senior participants with no signs of slowing down. He had reportedly been chosen by the district administration to run the marathon as he was known for his long distance running skills in his school.

Sources said Rudra been seen running over 5-6 km daily since he was three years old. He is often seen practising with his maternal grandfather B Rabindra who was a police constable and also a football player. As Rabindra is a sportsperson, he is often seen mentoring Rudra at the football field and aspires that one day, Rudra would be a national level runner.

“I ran from Korukonda to Malkangiri and it felt good. I feel like running 100 km, all thanks to my grandfather and coach D Rabindra. I thank everyone for this opportunity,” said Rudra when asked about his experience.

“I train atheletes from our area and it was such a proud moment to see my own grandson to ace the marathon. The way in which he ran the marathon gives me immense hope for his future. I request the district administration to support him and send him out of the State for better exposure,” said Rabindra.

“There were around 150 participants in the mini marathon organised for the Malyabanta Utsav from Korukonda to Butiguda in Malkangiri. This marathon was supposed to send a message of fraternity and unity transcending social barriers. Rudra, who is 6 yrs old, who also participated, demonstrated that we may have discovered another Budhia Singh among us here. He could be the next Olympian and has given us hope. It was a proud moment seeing him run. He was the main attraction in this marathon,” said Akshay Kumar Khemdu, Malkangiri Sub Collector.