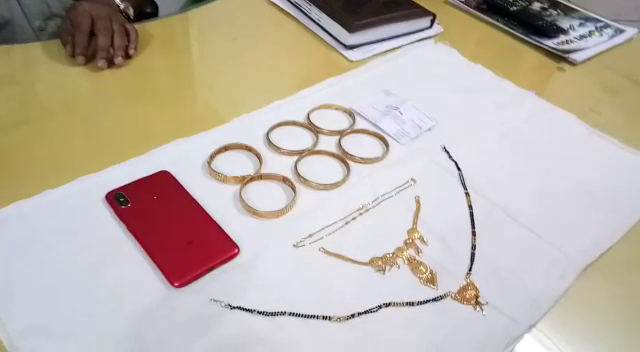 Bhubaneswar: A few days after miscreants reportedly looted gold jewellery from a car parked outside the Regional Passport Office (RPO) here, the Commissionerate Police cracked the case and arrested a person in this connection.

The Nayapalli police yesterday arrested the accused identified as Niranjan Nayak (27) alias Tikan and produced before judicial custody today. During interrogation, the accused confessed to his crime.

Gold looted from car parked outside Passport Office in…

The cops also seized the stolen items, including a gold necklace, a gold Mangalsutra, three pairs of gold bangles, a gold chain, a mobile phone and a copy of loan pawn ticket from his possession.

Police said two other cases are pending against accused Tikan at Laxmisagar and Nayapalli police stations. Investigation is on to find out whether more persons are involved  in the latest incident.

On July 10, unidentified miscreants allegedly looted gold jewellery from the car of one Rajesh Swain outside RPO here. As per the complaint lodged at Nayapalli police station, when Rajesh and his wife went inside the RPO after parking the car outside the office, miscreants looted the vanity bag containing gold jewellery and a bag from the car. A complaint was later lodged at Nayapalli police station in this connection.