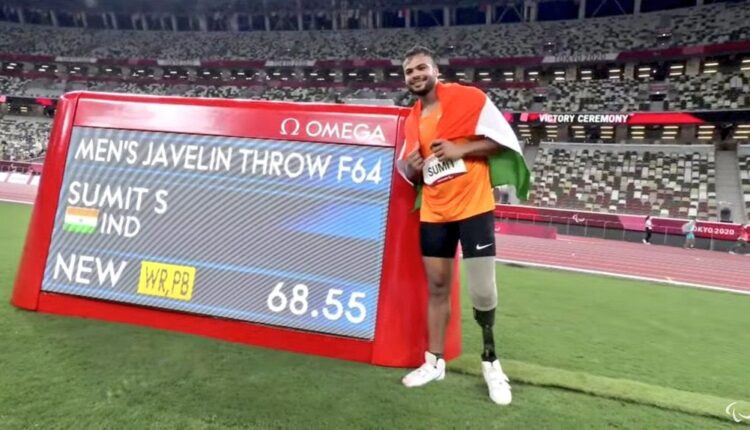 Tokyo: Sumit Antil set a new world record on his way to a gold medal in the Men’s Javelin throw – F64 final at the Tokyo Paralympic Games on Monday.

Australia’s Michael Burian won the silver medal with 66.29 metres while Sri Lanka’s Dulan Kodithuwakku took the bronze medal with 65.61 metres. Both Antil and Burian went past the old world record while the Sri Lankan came up with his personal best.

Antil’s gold in the second of the day for India, making it the most successful day in the Paralympic Games. Avani Lekhara won the gold medal in women’s 10mair rifle SH1 while Devendra Jhajharia and Yogesh Kathuniya won silver medals in the javelin (F46) and discus throw (T56) final. Sundar Singh Gurjar claimed a bronze medal in javelin throw F46, finishing behind Jhajharia.

India’s Sandeep Choudhary – an F44 category athlete — finished fourth with a throw of 62.20m, his season’s best effort just not good enough against athletes who were in great form. Sandeep has a best throw of 66.18 and he would have been in medals if he had managed to repeat that.

But the day belonged to Sumit Antil, who reserved his best for the big day.

The 23-year-old from Sonipat, who lost his left leg below the knee after he was involved in a motorbike accident in 2005, participated in able-bodied javelin throw till 2015 before taking a break.

On comeback in 2018, he started participating in para-sports and immediately made an impact, winning silver in the 2019 World Championships in Dubai.

He opened his campaign at Tokyo 2020 with the first throw of 66.95 and followed it up with 68.08 in his season throw, which virtually sealed the issue in his favour as nobody else could manage to come closer to 68. Sumit hurled the spear to 68.55 on his fifth throw.