Rs 650 crore, 200-bed Cancer Hospital to come up in Bhubaneswar 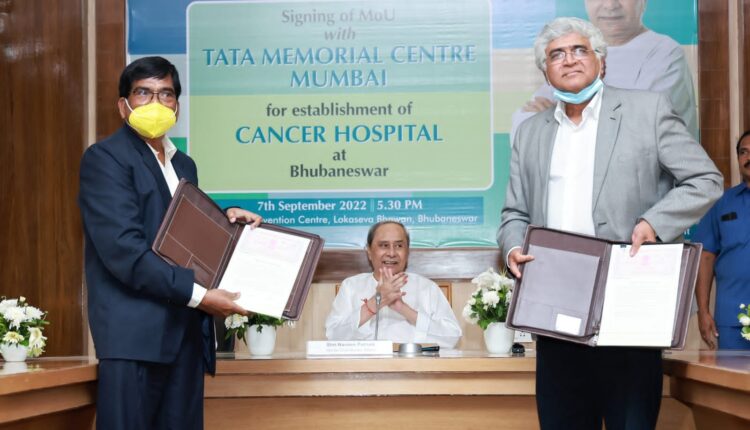 Bhubaneswar: A memorandum of understanding (MoU) was signed between Tata Memorial Centre, Mumbai and Odisha Health & Family Welfare Department at Convention Centre in Lok Seva Bhawan for establishment of a state-of-the-art Cancer Hospital in NISER campus at Jatni, today.

Chief Minister Naveen Patnaik, who was present at the event, expressed his happiness over the hospital and described it to be immensely helpful for many including the people of Odisha. He also said that the State government will provide a Cyclotron machine to meet the requirements for radio isotopes for treatment as suggested by Director of Tata Memorial Centre, Mumbai.

The Chief Minister Patnaik thanked Department of Atomic Energy, Government of India and NISER for their support and cooperation. He said that this institution will be an excellent example of cooperation between Private, State government, Central government and research institutions.

Health Minister Naba Das thanked the Chief Minister and TMC, Mumbai for the centre and spoke on the efforts of Health Department for building health infrastructure in the state.

Director of TMC Badwi expressed happiness over the support by State government. He said that the Centre will undertake a population based registry to understand the magnitude of the problem.

This project will have three founding principles – Service, Education and Research.

Under the service component, this institution will offer state-of-art treatment to people of Odisha so that cancer patients would not have travel outside the state.

The institution will run a full spectrum of oncological education and paramedical courses to create skilled manpower for the entire eastern region of India.

The institution will collaborate with NISER to conduct translational research for unique cancers of Odisha. The hospital will also help the state establish robust systems for affordable cancer care and control.

In addition, the proposed cancer hospital will coordinate with State government for skill development and capacity building of doctors and paramedical Staffs of Odisha. The TMC will provide technical support to strengthen the Cancer Care wings in Odisha’s Mayurbhanj and Ganjam districts.

The TMC will integrate this Cancer Hospital with National Cancer Grid of TMC, Mumbai.

Nearly 40,000 new Cancer patients are detected and around 18,000 cancer deaths are reported in Odisha, every year.

To reduce the pain and out of pocket expenditure of cancer patients and their family members, Govt of Odisha has been trying consistently to strengthen the infrastructure for cancer care in the State.

Under Odisha Comprehensive Cancer Care Programme (OCCP), Cancer Hospital with 50-bed each will come up in 11 districts in Medical Colleges and District Hospitals under State Govt initiative.

Tata Memorial Centre is a grant in aid institution in the Department of Atomic Energy, Government of India. The hospital has branches in Mumbai, Navi Mumbai, Sangrur, Mullanpur, Varanasi, Guwahati, Vizag and Muzaffarpur.

This hospital will be built inside the NISER campus by Tata Trust under their commitment to the Odisha Government in partnership with Tata Memorial Centre, Mumbai.