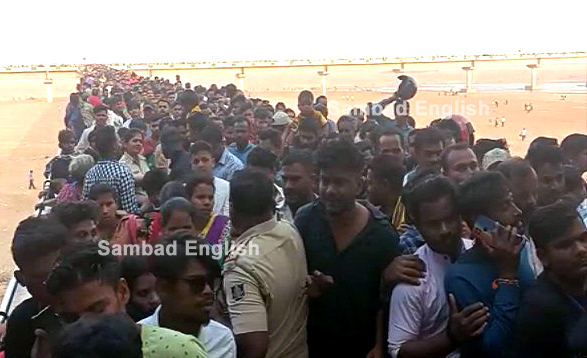 Bhubaneswar: Chief Minister Naveen Patnaik has announced an ex-gratia of Rs 5 lakh to the next of the keen of the woman who died in a stampede on a bridge connecting to Singhanath shrine in Badamba area of Cuttack district during Makara Mela today.

The Chief Minister also expressed his grief over the incident and directed the officials to provide free treatment to the injured people.

The Cuttack district administration, meanwhile, has imposed prohibitory orders under Section 144 of the CrPC at the shrine for two days following the incident.

Notably, the woman died and at least 25 others sustained injuries in the stampede.

As many as 2 lakh people reportedly thronged the shrine on the occasion of Makara Sankranti today, sources said.

The injured were immediately rushed to the community health centre (CHC) in Badamba. Later, some of them were shifted to SCB Medical College and Hospital (SCBMCH) in Cuttack city, sources said.

Makara festival could not be held at Singhanath shrine for last two years due to the Covid-19 pandemic. That is why large number of people thronged the shrine to celebrate the festival this year, said an official of the district administration.

Indian Army Day 2023: History, Significance and all you need to know