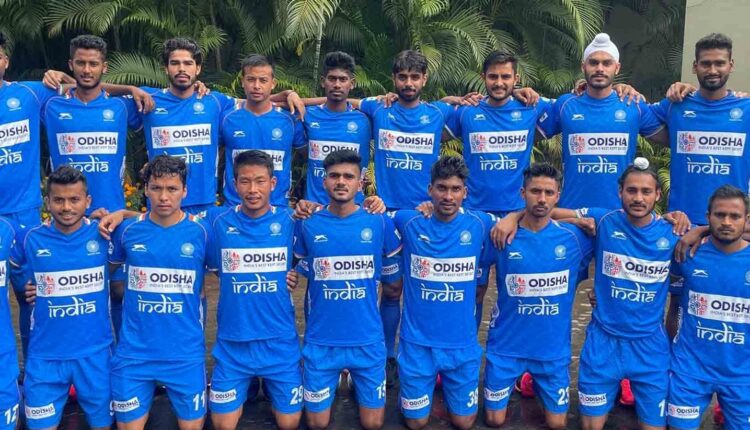 The team will defend the title at the much-awaited FIH Odisha Hockey Men’s Junior World Cup Bhubaneswar 2021, slated to begin on 24 November, 2021.

Total 16 teams from across the globe will participate in the international hockey event.

The Indian Junior Men’s Team will see Vivek Sagar Prasad, who was part of India’s historic Olympic Bronze Medal feat, Captain the squad while defender Sanjay who was part of the India U-18 team that won Silver at the Youth Olympic Games 2018 in Buenos Aires will shoulder the responsibility of Vice Captain.

Dinachandra Singh Moirangthem and Boby Singh Dhami have been chosen as alternate players who will be allowed to play only if there is an injury or someone in the 18-member squad is ruled out of the tournament due to covid-19.

Speaking about the team selection Chief Coach Men, Graham Reid said, “To choose the best 18 players to represent their country is one of the hardest things to do in sport. Each of these guys have put their everything into trying to make this team for the last 12-18 months. Through COVID, through sanctions and lockdowns, huge sacrifices have been made. We have chosen a group of 20 players, a team of 18 and 2 alternate players who we believe gives us the best chance of defending our title as Junior World Cup Champions. It is a well-balanced side with a lot of flexibility and flare. The key to these guys performing on the big stage will be to trust in each other and trust in their preparation.”

Reid further spoke of the team’s ongoing preparations in Bhubaneswar where they are putting in the hard yards needed to succeed in the tournament. “The players have been thoroughly enjoying the opportunity to train for the last few days at Kalinga Hockey Stadium which has become an icon in our sport. Even though the ground will be empty, the Olympics have proven that the spectacle of hockey can still be enjoyed by everyone involved,” stated Reid highlighting the team’s excitement ahead of the tournament.

India begins their campaign on 24 November against France. They will take on Canada on 25th November in their second match in the round robin league, followed by their match against Poland on 27th November. The knockout matches will take place between 1 December and 5 December as the teams will look to become the Champions of the prestigious quadrennial event. The other teams in the fray include Belgium, The Netherlands, Argentina, Germany, Canada, South Africa, Egypt, Pakistan, Korea, Malaysia, Poland, France, Chile, Spain and USA.

Post-Covid fatigue is most prevalent in diabetics: Study

Supreme Court agrees to hear plea by journalist, others booked under UAPA over Tripura violence