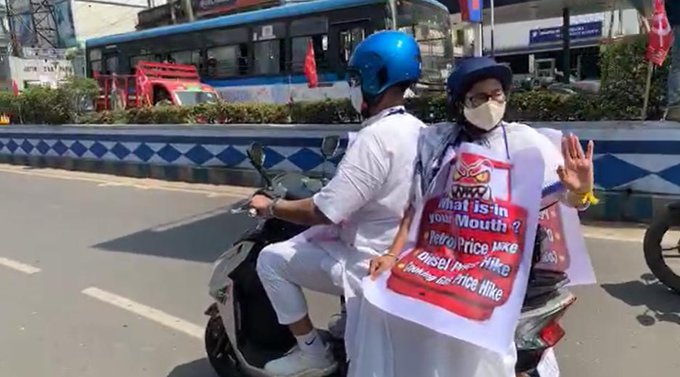 Banerjee was riding a pillion while Kolkata Mayor and State Municipal Affairs Minister Firhad Hakim drove the electric scooter from south Kolkata’s Hazra crossing to Nabanno. Both were seen wearing helmets while the CM was adorned with a protest banners hung from both sides of her body.

The state’s ruling Trinamool Congress has sharpened its attacks on the Bharatiya Janata Party (BJP)-led government at the Centre as petrol prices continue to burn hole in the common man’s pocket. Petrol was sold at Rs 91.20 per litre in Kolkata on Thursday while in Mumbai, the price of petrol crossed Rs 97 mark.

Mamata’s protest against prevailing fuel prices came at a time when the BJP is trying to make inroads into Bengal before the crucial state assembly elections.