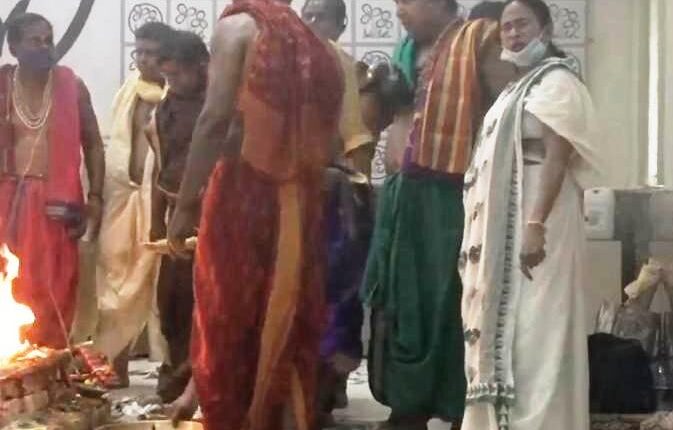 Bhubaneswar: A group of servitors of the Shree Jagannath Temple in Odisha’s Puri today performed a special puja at West Bengal Chief Minister Mamata Banerjee’s residence at Kalighat in Kolkata.

The team led by Jagannath Das Mohapatra, who dons the role of bodyguard (Badagrahi) of Lord Jagannath during Ratha Jatra, performed the rituals.

Apart from the CM, her nephew and Trinamool Congress’ Lok Sabha MP Abhishek Banerjee was also present on the occasion.

This coincided with the day of announcement of schedule of assembly polls in four states and one union territory, including West Bengal.

Mamata, along with her nephew, prayed for the success of the party in the forthcoming state Assembly polls.

It was learnt from the sources that the family could not travel to Puri this year ahead of the elections, owing to tight schedule and the Covid-19 pandemic. Abhishek usually takes a couple of trips to Puri every year but it was not possible for him also due to his tight schedule.