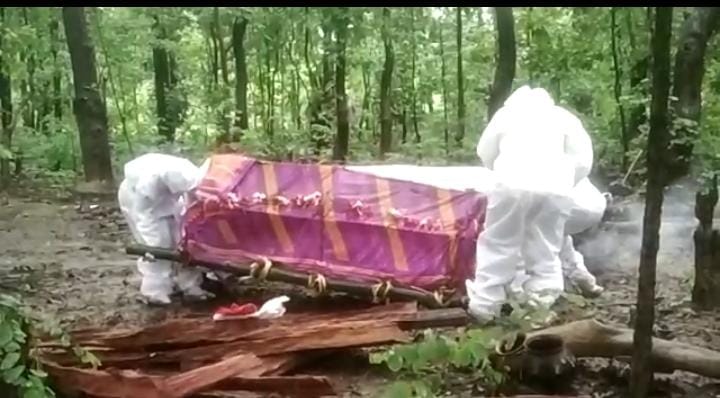 Mathili: Breaking the age-old traditions, a woman wearing PPE kit lit the pyre of her husband in Mathili area of Malkangiri district today.

As per reports, one Krushna Naik of Mandapalli village under Mathili block fell ill two days back. When Naik’s condition worsened, his family members admitted him to the Jeypore Sub Divisional Hospital and then shifted to the Saheed Laxaman Nayak Hospital in Koraput. During his tests at the hospital, he was found to be negative for the COVID-19 virus.

When there was no improvement in his health condition, Naik’s family members took him in an ambulance to Vishakhapatnam. But, Naik breathed his last on the way to Vishakhapatnam. Following this, the mortal remains of Naik was brought to his native place.

Due to the ongoing COVID-19 pandemic, Naik’s wife wore a PPE kit as a precautionary step and performed the last rites of the deceased.

Naik was working as the Block Education Officer of Borigumma and Lamtaput blocks.