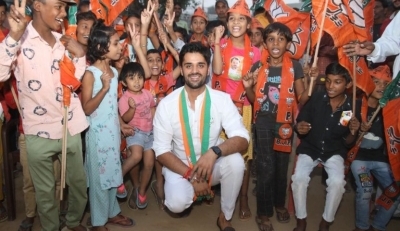 Late Bhajan Lal’s family has won 16 elections in a row since 1968 from Adampur.

Bishnoi is the fifth member of the Bhajan Lal family to contest from the family bastion. Earlier, his grandfather Bhajan Lal, grandmother Jasma Devi, father Kuldeep Bishnoi and mother Renuka Bishnoi had represented the seat.

A total of 22 candidates were in the fray in the by-election. The INLD has fielded Congress rebel Kurda Ram Nambardar, while AAP fielded Satender Singh, a BJP rebel.

Bishnoi lost his debut Lok Sabha elections from the Hisar constituency in 2019 as a Congress candidate. He is facing probe by the Enforcement Directorate under the Foreign Exchange Management Act (FEMA) and is currently out on bail.

The bypoll was necessitated after Kuldeep Bishnoi resigned as lawmaker and switched loyalties from the Congress to the BJP in August.

In the 2019 Assembly elections, Kuldeep Bishnoi had won this seat by defeating BJP’s Sonali Phogat by a margin of 29,417 votes.