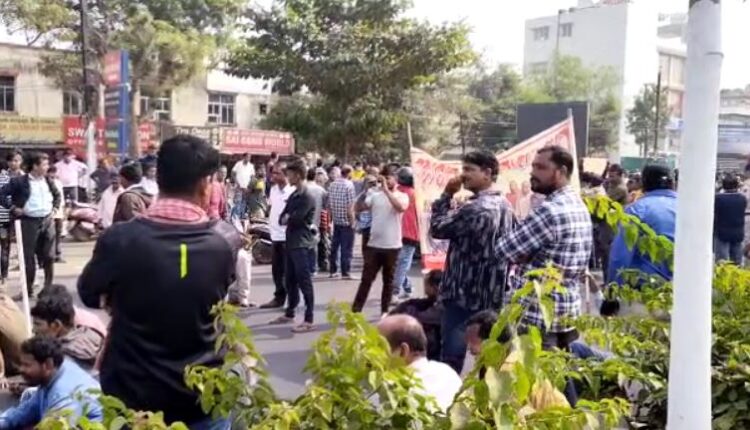 Bhubaneswar: Hundreds of vendors whose makeshift shops were evicted by the Bhubaneswar Municipal Corporation (BMC) in the city hit the streets opposing the act of the civic body, today.

Subsequently, the BMC decided to stop the eviction drive temporarily from tomorrow, which was being carried out for beautification of the city ahead of the Hockey World Cup.

The affected traders under the aegis of All Odisha Roadside Vendors’ Association today took out a rally from Damana Square here protesting the eviction. They alleged that the BMC didn’t rehabilitate them before evicting their shops.

They headed towards the North Zone office of the BMC at Nalco Chhak here and gheraoed it. As the protesters tried to enter the office premises, they were stopped by police. The rally resulted in severe traffic jam on Nalco Chhak-Patia stretch of the road.

Later, a discussion was held between the BMC officials and a delegation of the association at the office, following which the civic body decided to put the eviction drive on hold.

“Their demands will be placed before the BMC commissioner. Steps will be taken for their rehabilitation, as per the policy of the government. Eviction will be stopped for some days. The commissioner will take the decision regarding compensation,” said BMC north zone assistant commissioner Suresh Lenka.

“Our demands were stoppage of the eviction and provision of rehabilitation for the evicted vendors. We had submitted a memorandum having seven point charter of demands. The BMC officials agreed to some of our demands. The eviction will be halted from tomorrow. Whenever eviction is required, they will hold discussion with the association in this regard. They also assured used to rehabilitate the affected vendors under the MUKTA scheme. We have given them an ultimatum of seven days. If our demands aren’t met, the agitation will resume,” said Pratap Sahoo, President, All Odisha Roadside Vendors’ Association.