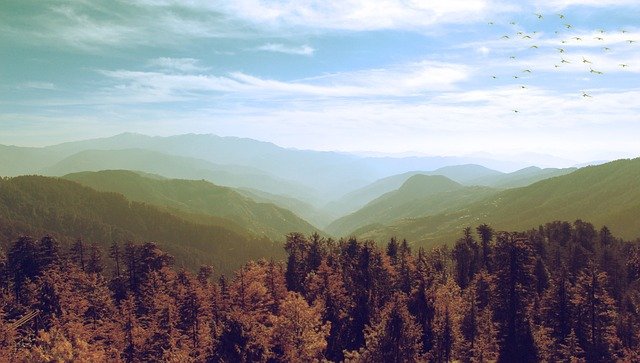 New Delhi: Forests from the western Himalayan region and from the northeastern states are consistently appearing as climate change hotspots across various climate scenarios in three selected time horizons, according to the India State of Forest Report 2021 (ISFR-2021) released on Thursday.

The northeastern states and the upper Malabar coast of India are projected to experience highest increase in rainfall, whereas parts of northeast, such as Arunachal Pradesh, Sikkim, along with northwestern parts such as Ladakh, Jammu & Kashmir and Himachal Pradesh are projected to experience least increase, and sometimes even decline, in rainfall, the ISFR-2021 said.

Forests play a vital role in climate change mitigation. As forests function as a sink of atmospheric carbon dioxide, they are the biggest terrestrial reservoirs of carbon on the planet. Forests can also become a source of CO2 and other GreenHouse Gases (GHGs) if they are cut, burnt or destroyed.

For the first time, the Forest Survey of India (FSI) – that brought out the ISFR 2021 report in collaboration with BITS Pilani (Goa campus) – has undertaken a study to map climate hotspots in the forest areas of the country.

A climate hotspot refers to an area, which is prone to adverse climatic change. This study is based on the computer model and projections of temperature and rainfall in three time horizons, 2030, 2050 and 2085, according to the short-term, mid-term and long-term goals for climate actions.

Studies have established how plants and vegetation structure changes vis-a-vis temperature and precipitation.

“The enhanced understanding about the climate change hotspots in Indian forests would assist in planning and strategising mitigation of climate change and devising appropriate adaptation measures,” said an official from the Ministry of Environment, Forest and Climate Change.

In its Nationally Determined Contributions (NDCs) submitted as part of the Paris Agreement of 2015, India plans to create an additional carbon sink of 2.5 to 3 billion tonnes of CO2 equivalent through additional forest and tree cover by 2030, and to better adapt to climate change by enhancing investment in development programmes in sectors vulnerable to climate change, particularly agriculture, water resources, fisheries, health and disaster management.

And more recently, at the COP26 at Glasgow in November 2021, India committed to reduce carbon emissions by 1 billion tonnes by 2030.