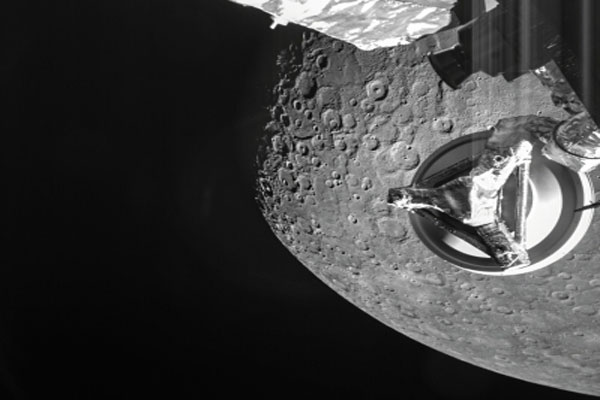 Paris: BepiColombo, a joint mission of European Space Agency’s (ESA) and Japan Aerospace Exploration Agency (JAXA), successfully completed the second of its six encounters with Mercury — about 200 km above the planet’s surface.

The spacecraft, which is on its way to the mysterious innermost planet of the solar system Mercury, aims to enter the planet’s orbit in 2025.

It made the second encounter with Mercury at 09:44 UTC (3:14 pm IST) on June 23, and just as the first one on October 1. It captured an amazing array of the planet’s rich geological features along with scientific data.

“Hello again Mercury!…Feeling the presence of #Mercury as we make our second #MercuryFlyby at just 200 km from its surface! This gravity assist will slow our velocity in relation to the Sun by about 1.3 km/s,” mission officials said in a tweet.

The two monitoring cameras (MCAM) on board the spacecraft took a beautiful sequence of 56 black-and-white snapshots at 1024 x 1024 pixel resolution.

The image sequences lasted about 15 minutes starting soon after closest approach to Mercury. The first sequence showcases images taken by MCAM-2, starting from a distance of around 920 km from the surface of the planet and finishing at about 6099 km. The second sequence shows images from MCAM-3 covering a similar distance range (approximately 984 km – 6194 km).

Since MCAM-2 and MCAM-3 are located on either side of the spacecraft, and the image acquisition alternated quickly between the two cameras with about 15-20 seconds between them, the final sequence shows a composite of the two views, giving an impression of the complete planet receding behind the spacecraft.

The images show beautiful details of Mercury, including Heaney — a 125 km wide crater covered in smooth volcanic plains. It hosts a rare example of a candidate volcano on Mercury, which will be an important target for BepiColombo’s high resolution imaging suite once in orbit.

Just a few minutes after closest approach and with the Sun shining from above, Mercury’s largest impact feature, the 1550 km-wide Caloris basin swung into view for the first time, its highly-reflective lavas on its floor making it stand out against the darker background.

The volcanic lavas in and around Caloris are thought to post-date the formation of the basin itself by a hundred million years or so, and measuring and understanding the compositional differences between these is an important goal for BepiColombo.

“The images highlight many of the science goals that we can address when BepiColombo gets into orbit. I want to understand the volcanic and tectonic history of this amazing planet,” the officials said, in a statement.

BepiColombo will build on the data collected by NASA’s Messenger mission that orbited Mercury 2011-2015. BepiColombo’s two science orbiters — ESA’s Mercury Planetary Orbiter and JAXA’s Mercury Magnetospheric Orbiter — will operate from complementary orbits to study all aspects of mysterious Mercury from its core to surface processes, magnetic field and exosphere, to better understand the origin and evolution of a planet close to its parent star.

BepiColombo’s main science mission will begin in early 2026. It is making use of nine planetary flybys in total: one at Earth, two at Venus, and six at Mercury, together with the spacecraft’s solar electric propulsion system, to help steer into Mercury orbit. Its next Mercury flyby will take place on June 20, 2023.