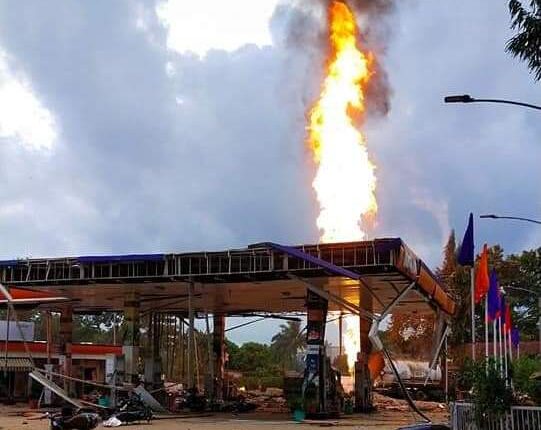 Bhubaneswar: A major fire broke out at a petrol station near Raj Bhavan in Odisha capital today.

An underground CNG storage tank caught fire which led to the mishap along with an explosion. The blast injured multiple persons besides damaging many vehicles at the petrol station, reports said.

Though the official figure regarding the casualties was yet to be known, several persons were reportedly injured. Two critically injured victims have been admitted to the SCB Medical College and Hospital in Cuttack while others are undergoing treatment at the Capital Hospital here.

“A vibration under the ground followed by an explosion took place when were were filling petrol in our two-wheelers at the station,” an eyewitness said.

Fire personnel managed to douse the flames while police have cordoned off the area and advised denizens to stay away from the spot of the mishap.

Window panes of many houses of nearby residential areas broke under the impact of the explosion leaving the residents panic stricken. Many of them rushed out of their houses in fear.

Fire extinguished and situation under control in the petrol pump near Raj Bhawan. Hon’ble Chief Minister Sri @Naveen_Odisha has announced free medical treatment for persons injured in the incident and wished their speedy recovery.

Petroleum & Natural Gas Minister Dharmendra Pradhan has ordered the Department Secretary to probe into the incident and submit a report.