Help them, govt should use its resources: SC to Centre on Ukraine-returned medical students 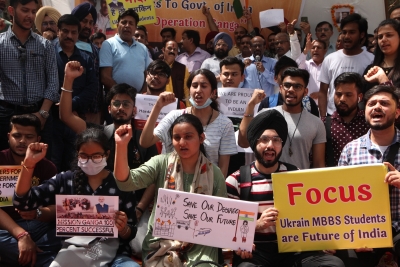 New Delhi: The Supreme Court on Friday suggested that the Centre could develop a web portal providing details of foreign universities for the medical students who returned from Ukraine following Russia’s invasion in February, to complete their studies.

A bench comprising Justices Hemant Gupta and Sudhanshu Dhulia told Solicitor General Tushar Mehta, representing the Centre, that the government should help Indian students who will now have to go abroad under alternative schemes and the High Commissions could help the students.

“Start a web portal, post details like available seats in colleges (alternate foreign universities, which are compatible), fees, ensure they are not fleeced by agents,” the bench said, adding that the government should use its resources to help the affected students.

Mehta said that he is not taking an adversarial stand and sought time to get instructions from the authorities concerned regarding the suggestions made by the top court.

He further submitted that the Centre has taken several measures to help the students, including for the ones who could not do their clinical training have been permitted to complete it here and it has been ensured that they will get their degrees from Ukraine, and the other is an “academic mobility programme”.

The bench noted that the government has a problem in admitting 20,000 students in Indian colleges and added that students will have to go to foreign countries to avail alternate “academic mobility programme”, and that the Centre must coordinate, extend all the required help.

The Centre has told the Supreme Court that the medical students cannot be accommodated in the Indian universities in the absence of provision under National Medical Commission (NMC) Act, 2019, and if any such relaxation is given then it will seriously hamper the standards of medical education in the country.

In an affidavit, the Union inistry of Health and Family Welfare said: “The prayer seeking transfer of these returnee students to medical colleges in India would not only be dehors the provisions of Indian Medical Council Act 1956, and the National Medical Commission Act, 2019, as well as the regulations made thereunder, but would also seriously hamper the standards of medical education in the country.”

During Friday’s hearing, a counsel suggested that the Centre should declare 20,000 students who returned from Ukraine as “war victims” as per the Geneva Convention and extend them relief.

The bench orally observed that the counsel should not take it to that level as the students had gone there voluntarily.

Mehta said NMC allowed academic mobility in foreign universities, whereby those students can complete their courses from other foreign universities and also informed the court that an officer has been appointed to coordinate with students to find which of the varities are compatible.

The top court said one officer cannot handle 20,000 students and the government can develop the web portal for students to access information.

Senior advocate Salman Khurshid pointed out language and fees issues — a student who studied in a Ukrainian university might find it difficult to adapt to a Polish university, and issues related to fees could also arise.

The bench said: “They will give all details on the portal. You want everything. If they want to complete their course, they have to find a way out.”

The bench then said: “You do not have a right over Indian universities.”

The apex court has scheduled further hearing on the matter for September 23.

The top court was hearing a batch of petitions filed by students, who had to return from the war-torn Ukraine, seeking permission to complete their medical education in India.