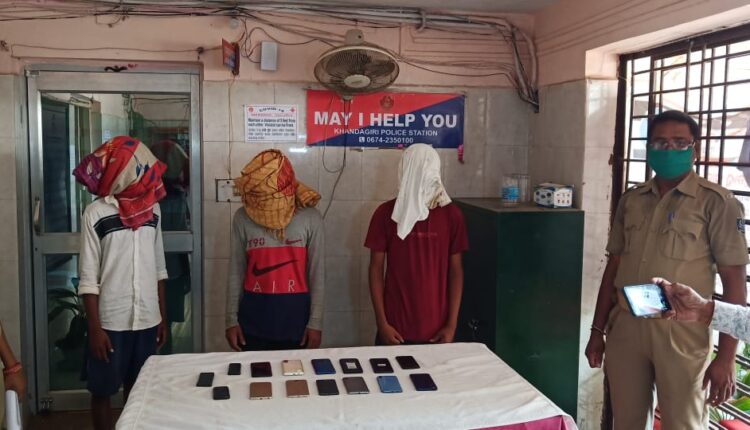 Bhubaneswar: In a major breakthrough, the Commissionerate Police arrested three members of a highway looters’ gang and seized two motorcycles and 15 mobile phones from the possession of them in Bhubaneswar.

When one Hareskrushna Senapati of Baipur was going towards his rented house from News7 office in Khandagiri on his motorcycle, two persons riding a motorcycle bearing registration number OD33K 1771 came from behind and snatched his mobile phone at Baramunda flyover.

On basis of a complaint lodged at Khandagiri police station, the police launched an investigation and apprehended Sonu alias Debasis Pujapanda and Kishan alias Krishna Singh. After brief questioning of the duo, the police came to know about the receiver of the mobile phone namely Baina alias Basanta Kumar Nayak.

A police official said the accused are habitual offenders. They were involved in multiple loot cases on NH-16 from Nayapalli to Khordha by using the motorcycle with tampered registration numbers.

After registering a case, police arrested the three accused and forwarded them to the court today.