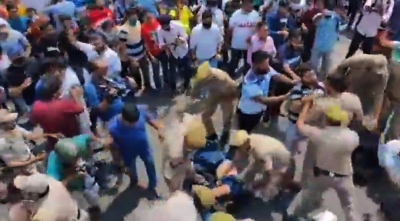 Jammu: Kashmiri Pandit government employees carried out a protest on Wednesday in J&K’s Jammu city demanding relocation from the Valley in the aftermath of the killing of another member of the community.

Protesters gathered in the busy Bikram Chowk disrupting the traffic.

The Kashmiri Pandit employees recruited under the Prime Minister’s special rehabilitation package and posted in different parts of the Valley said they have become soft targets for the militants and the government has failed to protect them.

“We were employed in the Valley under a special package, but everyone is aware about the situation there. We want our relocation to Jammu so that we can at least remain alive,” the protesters said.

Senior police officers later pacified the protesters after which traffic was restored in the area.