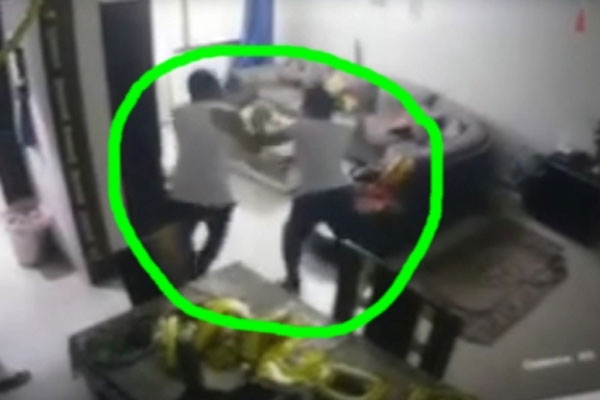 Share
Jaipur: In a strange case of domestic violence, a school principal in Alwar district of Rajasthan has moved to the court seeking protection from the physical and mental harassment of his wife.

According to the man, his wife has been beating him black and blue leaving him weak mentally.

In a police complaint, the troubled principal, alleged that his wife has been attacking him with a pan, stick and cricket bat. The distraught principal got CCTV cameras installed in the house to collect the evidence. In one of the videos doing rounds in the social media, the woman can be seen beating the principal with a cricket bat as their son looked on.

He has approached the court for protection and presented the footage of the incident. The court has ordered him to provide security.

The principal– Ajit Singh Yadav had tied knot with Suman, a resident of Sonipat, Haryana after falling in love with her seven years back.

Initially, their life was peaceful but after some time the violence started.

With frequent violence, Ajit Singh has suffered several injuries and has been seeking medical help to cure them.

Singh says he was putting up with the violence keeping in mind the dignity of a teacher’s profession. “But now I have taken refuge in the court as my wife has crossed all the limits .”

“I have never raised my hand on Suman and have never taken law in my hands. I am a teacher. If the teacher raises his hand on a woman and takes the law into his own hands, then it is against Indian culture and his position.

CRUT releases timings of special shuttle service ahead of…