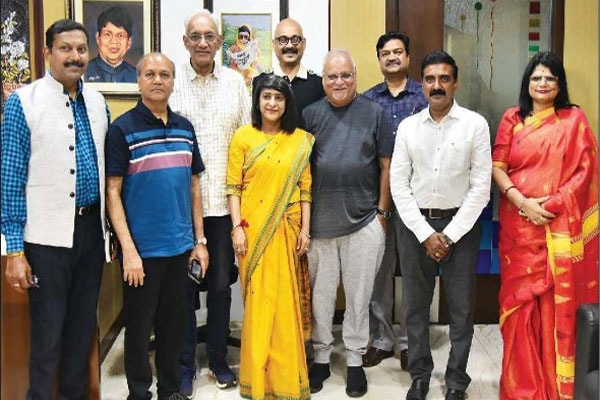 The guests sat down for a brief meeting with MD Sambad Group  Monica Nayyar Patnaik, COO and publisher Kamalakant Mohapatra, DGM (News) Arabinda Das, DGM (HR) Baijayanti Kar, DGM (Marketing) Sanjay Gaur, among others. They discussed the present scenario and future perspectives of advertisement revenue of print media sector. Also, unanimously agreed that newspaper is going to stay forever and there’s no second thought about it.

Srinivasan Swamy, who’s also known as Sundar Swamy, said that attention must be paid to subscription revenue. “Almost every newspaper has e-paper services. But they are available online free. Since majority of people remain active now-a-day, newspaper organizations must focus on finding ways to generate revenue through the online editions of their publications.”

MV Shreyams Kumar said, “A lot of fake news are being circulated on social media. Newspapers must address the truth behind those fake news in order to win the readers’ trust. We at Mathrubhumi have initiated a  fact-check system to verify news. Other newspaper organizations must also consider initiating fact-check systems.”

“Newspaper is still seen as the most credible item. Digital is now losing its sheen due to the fact that a lot fake news is being circulated there. If you want to know about its veracity, you need to read the newspaper,” said Ramesh Narayan.

Talking about how to inculcate newspaper reading habits among the young generation, he further said, “The main influencer in the life of any young student is a teacher. So we have to ensure that teachers must motivate their students to read newspapers regularly.”