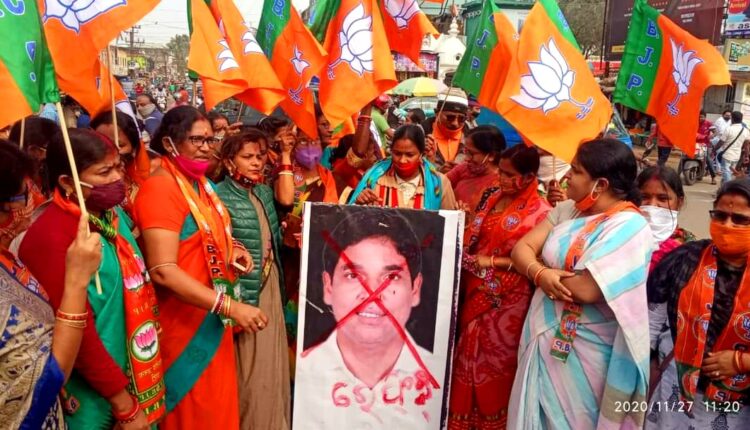 Bhubaneswar/Balsore/Nayagarh: Demand for resignation of Odisha Agriculture Minister Arun Sahoo gains momentum as activists and members of opposition BJP and Congress today hit streets at different places across the state over the alleged murder of a five-year-old girl at Jadupur village in Nayagarh district.

As part of the protest, BJP and Congress activists in Bhubaneswar, Balasore and Nayagarh  were seen burning effigies of the Minister accusing him of shielding the culprits involved in the alleged abduction and murder case.

In Bhubaneswar, hundreds of Congress youth activists took out a protest rally from Master Canteen  Square here demanding Arun Sahoo’s resignation. However, over a hundred activists were detained by police while they were marching towards the Assembly. Similarly, BJP activists took out a bike rally as a mark of protest demanding arrest of the culprits involved in the incident and removal of Minister Arun Sahoo from Odisha Cabinet.

Similarly in Balasore, members of BJP Mahila Morcha led by president Kamala Bindhani took to streets and alleged that Minister Sahoo, who is also the Nayagarh MLA, is shielding the the prime accused Babula Nayak in the murder case and has also threatened the local Sarpanch to suppress the matter. Burning the Minister’s effigy, the women activists demanded his ouster and arrest of the main accused.

In Nayagarh, the saffron party activists, including women staged a demonstration in front of the Collector office demanding a CBI probe into the incident. They alleged that police are trying to protect the main accused in the murder case since he is a close associate of Minister and local MLA Arun Sahoo. The activists also garlanded an effigy of the Minister with shoes as a mark of protest.