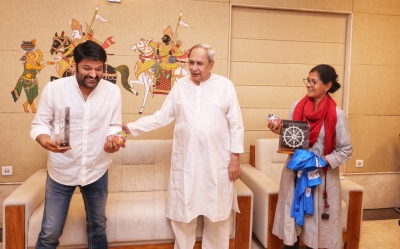 Following the interaction, the Chief Minister gifted each of them a silver filigree Konark wheel, a memento and jersey of the Indian hockey team.

In a tweet, Patnaik said, “It was a pleasure meeting actor-comedian Kapil Sharma and filmmaker Nandita Das, who have taken time out from shooting of their upcoming film in Bhubaneswar. Encouraged them to explore Odisha’s treasure-trove of natural beauty and heritage.”

Sharing some pictures of the meeting on his Twitter handle, Sharma said, “It was a pleasure meeting CM Naveen Patnaik. Thank you for the wonderful hospitality n making us feel at home. Your heart is as beautiful like your state, Odisha will stay in my heart forever.”

It was a pleasure meeting the honorable CM of Odisha Shri @Naveen_Odisha ji 🙏 thank you for the wonderful hospitality n making us feel at home ❤️ your heart is as beautiful like your state ❤️ #Odisha will stay in my heart forever 🙏 #Gratiude 😇🙏 pic.twitter.com/Bir3AmTsAz

Earlier on Thursday morning, Sharma shared a video, where he was seen riding a bike on the streets of Bhubaneswar.

“Enjoying the early morning ride on my favourite bike,” Sharma said in the post shared on Instagram.

Sharma is in Odisha to shoot for an upcoming film directed by Nandita Das. He has been sharing videos and pictures on social media platforms since he began shooting for the film, which is yet-to-be-titled.

Sharma, who is playing the role of a food delivery boy in the movie, has been seen shooting in different locations of the city for the past few days.

Shahana Goswami plays the female lead in the upcoming movie, in which she will be seen as Sharma’s wife.

Happy Holi 2022 Wishes, Messages to greet your friends and special ones