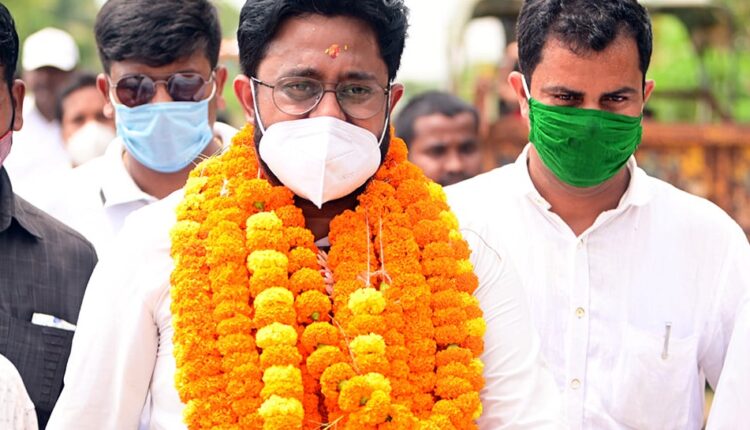 Pipili: What could be the best tribute to late Biju Janata Dal (BJD) stalwart Pradeep Maharathy on his first death anniversary than the historic win of his son in bypoll to his Pipili Assembly Constituency today!

His son Rudra Pratap Maharathy emerged victorious in bypoll to Pipili Assembly Constituency – which is considered as the fort of the ruling BJD.

“The voters are my malik (Lord) and I am their sevak (servant). As I have told earlier that I am here to serve people of Pipili. Whether I am elected as the MLA or not, I would have stood by them always. I will move forward by the order of people,” Rudra told reporters.

“After demise of my father, the  people of Delang-Pipili were waiting for an MLA for around one year. The long wait is going to end soon. I am not here for celebration, rather will focus on work. My priority will be to complete the pending work initiated by my late father and will reach out common people to address their issues,” he added.

After counting of votes in final 26 rounds, the BJD candidate Rudra Maharathy has managed to bag 96,392 votes against BJP’s Ashrit Pattanayak with 75,770 votes.

Congress nominee Bishwokeshan Harichandan Mohapatra was placed in third position with only 4,237 votes.

State Chief Electoral Officer S.K. Lohani said a total of 1,80,930 votes including 893 postal ballots were counted while 136 votes were rejected due to various reasons.

BJD President and Odisha Chief Minister Naveen Patnaik thanked the people of Pipili Assembly Constituency for lending their support to the party candidate Rudra Pratap Maharathy during the bypoll. He also congratulated the party leaders and activists.

The counting of votes in Pipili by-poll began today amid tight security to decide the electoral fate of total 10 candidates. The voting for the bypoll in the constituency was held on September 30. Around 2.30 lakh (78.24 per cent) voters had exercised their franchise last week.

The ruling BJD was confident to retain the seat as during campaign, Rudra had gained massive support from voters. Late Pradeep Maharathy had won seven times in a row (five times on BJD ticket since its inception in 2000) from Pipili. The seat was lying vacant after his death on October 4 last year.

The bye-election was first scheduled to be held on April 17, but it was countermanded after Congress candidate Ajit Mangaraj died of Covid-19 on April 14. It was slated for May 13, but was deferred again. The bypoll was subsequently rescheduled for May 16. Again, it was postponed in the wake of upsurge in COVID cases in second wave of the pandemic.

The ‘mystery’ with Punjab Kings’ Ravi Bishnoi – the perpendicular angle!