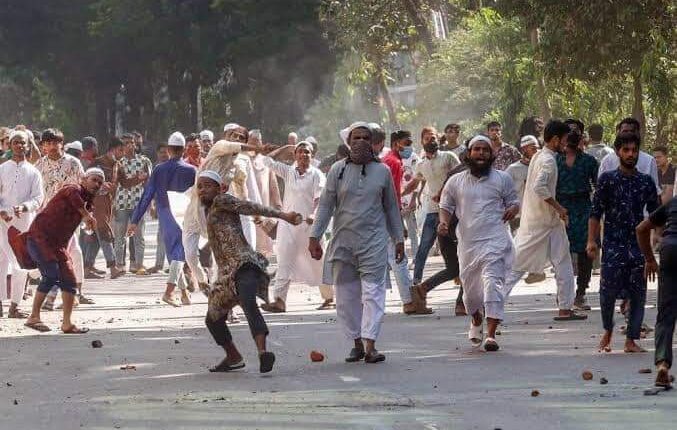 Varanasi: The Kashi Dharam Parishad and seers related to it have demanded “a complete lockdown of the mosques from where stones are being pelted and imposition of NSA on the jihadis who threatened Nupur Sharma”.

The seers have condemned the violence that broke out after the Friday prayers across the country.

Mahant Balak Das of Patalpuri Math, said: “Such acts of jihadis are not acceptable and will not be tolerated. We strongly condemn the threat to Nupur Sharma and appeal to the government to immediately put a check on jihadis.

“We are following the path of Lord Ram. We are peace-seekers. The violence that is being unleashed is unacceptable. The government should take immediate steps to stop this.”

Mahant Balak Das regretted that “The country is burning and temples are being demolished. Hindu deities are being insulted every day. We want action against jihadis by the way of law. We will take a decision after talking to all the sects, akhadas and Nagas”.

The Parishad has passed a 16-point resolution condemning the nationwide violence.

It will be sent to dharmacharyas across the country as well as the Central and state governments.

The main points of the resolution demand that ‘jihadis’ who make derogatory remarks against Hindu deities and make jokes in films, should be sent to jail.

Property should be confiscated by arresting the maulanas who spread hatred.

CCTV cameras should be installed in every mosque, speeches of maulanas should be recorded.

NSA should be imposed for making provocative statements.