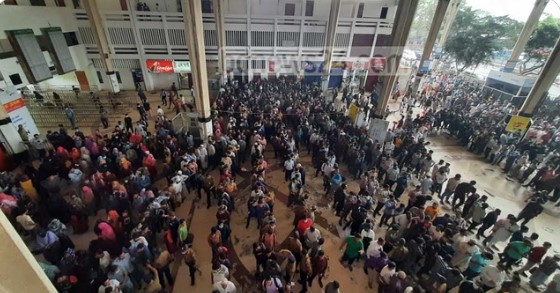 Dhaka: In a desperate bid to get advance tickets ahead of Eid on May 3, thousands of Bangladeshi travellers made “snake-like” queues at railway ticket counters in the capital Dhaka.

As Eid-al-Fitr is drawing to a close, marking the end of the Muslim fasting month of Ramadan, the ticket counters at the city railway station have started witnessing a mad rush of people since last weekend, Xinhua news agency said in a report on Thursday.

People of all ages and even women in large numbers are now thronging Kamalapur Railway Station in the capital to buy tickets.

Bangladesh Railway on April 23 began to sell train tickets in advance for travellers who will flock home to join in the festivities with their kith and kin.

The Muslim majority Bangladesh will celebrate the Eid-al-Fitr festival on or around May 3, depending upon moon sightings.

The desperation for reservation of tickets brings queues of thousands standing for agonizingly long hours that are apparently getting longer day by day.

“I came to the railway station to book tickets to Noakhali district,” said Enamul Islam, a ticket seeker.

He said the waiting is getting longer.

“I’m not sure whether finally I could manage a ticket,” he said.

Unfortunately, an official who preferred to be unnamed said there is no guarantee for getting a ticket because the number of people seeking tickets is much more than their capacity.

Like previous years, he said, half of the tickets will be sold at counters and the rest online.

Railways Minister Nurul Islam Sujan earlier this month said this time advance tickets for Eid would be available in train stations and on the app.

He said they would operate 92 intercity trains in a special arrangement as there would be no weekly break for seven days for trains before Eid.

Professor Md Hadiuzzaman, director of the Accidental Research Institute at Bangladesh University of Engineering and Technology, said recently that the mad rush of millions of home-bound people could impact Bangladesh’s entire transportation system.

“In our research, we found that 11.5 million people left Dhaka for Eid in 2019, but it reduced to only 6 million during the pandemic.”

But this time, he said, the number will be doubled again.

“Some 3 million people may leave Dhaka every day in the four days before Eid,” he said.

According to the expert, trains, buses and ferries have the capacity to transport 13-14 lakh (1.3-1.4 million) passengers daily.

“Therefore, there is no transportation system for (the rest) 1.6 million people,” he added.

Idol of Lord Vishnu made from black stone recovered in…