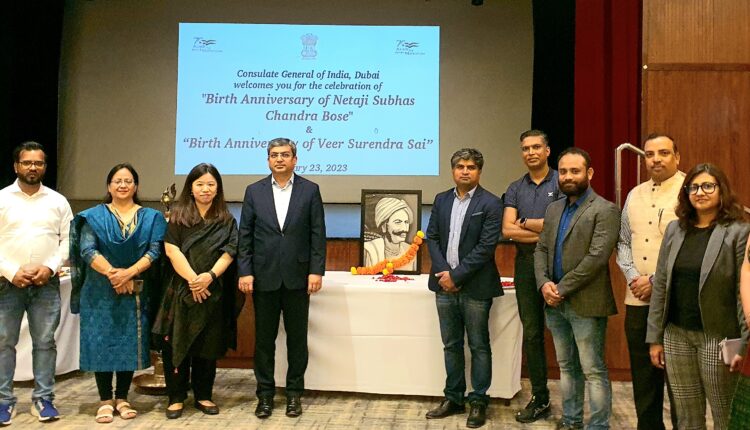 Rich tributes were paid to Veer Surendra Sai on his 215th birth anniversary for his valor, bravery and heroism at a symbolic function attended by leading community members on the premises of the Indian Consulate, Dubai, on January 23 (Monday).

Paying the tributes, Dr Aman Puri, the Consul General of India in Dubai, spoke about two stalwarts of Indian freedom movements who epitomized courage and patriotism.

“Veer Surendra Sai is an iconic hero and today is an opportunity for all of us to learn more about the his heroic life,” he said.

He said that Jharsuguda airport in western Odisha, inaugurated by Prime Minister Narendra Modi in 2018, was named after Veer Surendra Sai to pay the nation’s tribute to the brave patriot.

The function commenced with the traditional lamp lighting ceremony followed by floral tributes to the legendary freedom fighters. A video on Veer Surendra Sai’s life and time was also played out in front of the gathering.

Another prominent Non Resident Odia, Priyadarshee Panigrahi, talked about this commemoration being an emotional moment for all Odias, as this was the first time Veer Surendra Sai’s birth anniversary has been commemorated in any diplomatic mission across the world. Priyadarshee also said that Surendra Sai’s imprisonment for a total of 37 years (in two phases of 17 and 20 years) was probably the longest any freedom fighter in the world has been through. Calling Surendra Sai an unsung hero, Priyadarshee said a lot more needs to be done to propagate his legacy.

The speakers expressed that an official documentary needs to be made on Veer Surendra Sai’s life and a request could be made to Odisha Government in this regard.

This was the fourth consecutive year of the commemoration of Veer Surendra Sai’s birth anniversary in Dubai, UAE. It was commemorated for the first time outside India in Jan, 2020, again in Dubai and since then the community has tried to organize it every year. The 2022 commemoration had to be shifted to online mode due to the pandemic.

Off Grid Experiences set to top the bucket list in 2023