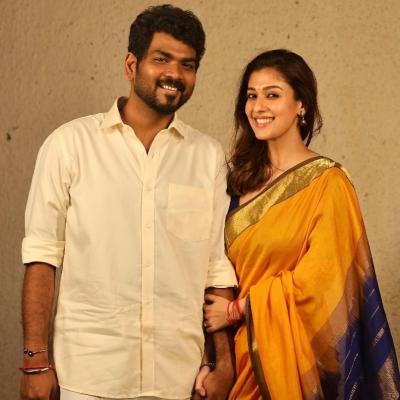 Chennai: Director Vignesh Shivan wed the love of his life, actress Nayanthara, at a grand and glittering ceremony on Thursday in the presence of close family members and a host of friends from the film industry.

Vignesh Shivan tied the sacred ‘Thali’ around actress Nayanthara’s neck at around 10.24 a.m. even as guests who had gathered for the wedding showered their blessings upon the newly wed couple.

Sources said that the couple came down the stage after the wedding and took the blessings of actor Rajinikanth who was seated next to Shah Rukh Khan and director Mani Ratnam in the audience.

Superstars Rajinikanth, Shah Rukh Khan, Vijay Sethupathi, director Mani Ratnam, actors Suriya, Karthi and Jyothika were some of the high profile guests who were present on the occasion.

Actor Vijay Sethupathi, who gave Vignesh Shivan his big break with ‘Naanum Rowdy Thaan’, arrived with his entire family to wish and greet the couple on their special day.

Security to the venue was tight with as many as 80 bouncers having been deployed apart from a heavy posse of police personnel.