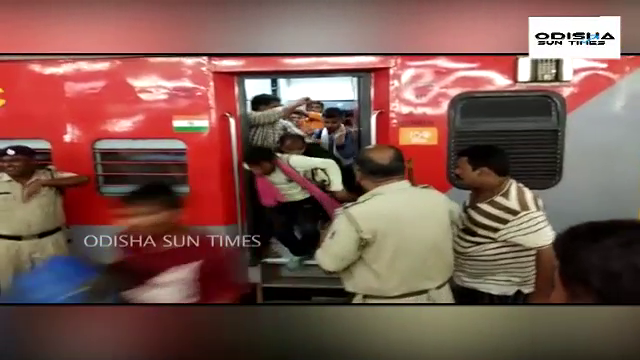 Bhubaneswar:  A high-pitch drama was witnessed at Bhubaneswar Railway Station here last night after hundreds of army job aspirants, who had come from Uttar Pradesh and Bihar to participate in the ongoing recruitment drive here, created a nuisance as they tried to board New Delhi-bound Purushottam Express without reservations for their return.

Reportedly, after appearing the recruitment drive underway at 120 Battalion campus here from October 14, the aspirants forced enter the train that arrived at the station at 11.02 PM yesterday. Not only that, after boarding, some of the youth pulled the chain five times to stop the train so as to help their friends get into it. Moreover, some of them had managed to enter the luggage bogie of the train.

The express which usually halts at the station for five minutes left the station here by over an hour delay due to the ruckus.

Since the erring youth were in hundreds putting inconvenience to on-board passengers, the GRP and RPF officials had a tough time to take control over the situation. After chasing the youth for a while, the cops later resorted to lathicharge to get them all out of the train.

Reportedly, the train finally departed the station at around 12.15 AM. The police also detained a youth hailing from Mirut in UP on charges of entering a luggage bogie of the train after breaking it lock. Following the incident, security has been beefed up at the railway station to avoid such unpleasant situation further and keep an eye on the job aspirants.

Meanwhile, Police Commissioner Sudhanshu Sarangi has written a letter to the Commanding Officer of 120 (TA) Battalion requesting him not to conduct such interviews in the state capital in future.

“Many of the job aspirants fail in the first phase of examination, following which they create public nuisances to vent out their anger. And, it has become very difficult for police personnel to control the situation. We have also urged the state Government to ask the Centre for conducting the recruitment drive in rural areas in stead of the capital city,” said Sarangi.