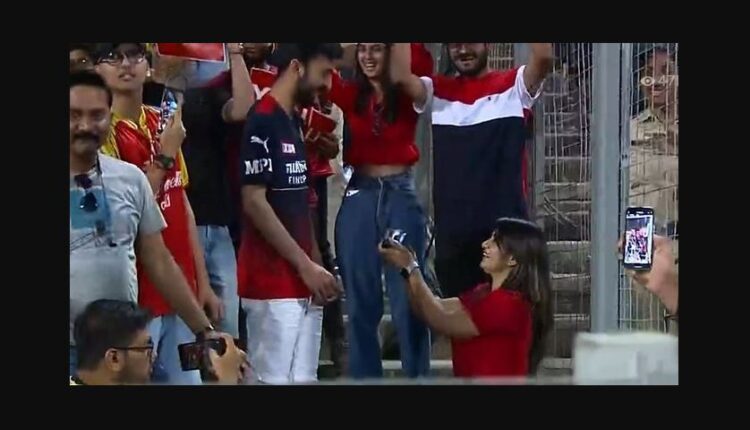 Pune: While Royal Challengers Bangalore and Chennai Super Kings were jostling to win an Indian Premier League (IPL) match, a young couple were making promises to spend life together in the stands of the Maharashtra Cricket Association Stadium in Pune to commemorate one of the best moments of their lives.

The cameraman, who never misses out on such occasions, covered the moment very well. After this,the pictures and videos of the couple have gone viral on social media.

A girl was seen proposing a man, who was wearing an RCB jersey, during the 11th over the CSK innings when cameras caught the girl getting down on her knees to offer a ring to a man next to her, who appeared to be accepted it gleefully amid thunderous applause from the crowd. They embraced the moment and hugged each other. As soon as the proposal was seen on cameras, their pictures and videos started to go viral all over social media.

The former cricketer Wasim Jaffer, known for his hilarious social media posts, however gave it a new twist. Jaffer said the girl made the right decision in choosing an RCB fan as her life partner.

“Smart girl proposing to an RCB fan. If he can stay loyal to RCB, he can definitely stay loyal to his partner. Well done and a good day to propose,” tweeted Jaffer.

Smart girl proposing an RCB fan. If he can stay loyal to RCB, he can definitely stay loyal to his partner 😉 Well done and a good day to propose 😄 #RCBvCSK #IPL2022 pic.twitter.com/e4p4uTUaji

After Mahipal Lomror (42) and Dinesh Karthik (26 not out) hit handy knocks to take Royal Challengers Bangalore to 173/8, Bangalore’s bowling attack, led by Patel, Maxwell and Josh Hazlewood adopted the pace off approach successfully in restricting Chennai to 160/8 in their 20 overs.

The result means that Bangalore are now at fourth place in the points table while Chennai were left to rue their inability to build on a wicketless power-play and Devon Conway getting a fine 56 as the rest of the batters failed to stay at the crease for long on a two-paced pitch.