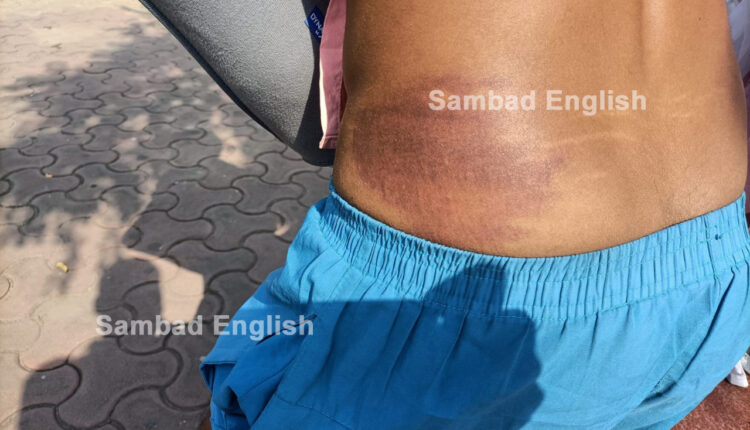 Rourkela: An allegation of police excess was leveled today against Hatibari police of Sundargarh by a 26-year-old youth named Aditya Mishra from Olani Podatola locality, who was brought to the station in connection with a road accident and was given third-degree torture by three cops.

The allegation came close on the heels of another incident of police excess by Bonai police in the district, a source said.

Two of the cops overpowered Aditya and the third one beat the victim severely with a baton. Even to the extent, the cop repeatedly kicked him on his private parts. The left hand of the youth has fractured due to third-degree torture. Later, Aditya was admitted to Rourkela Government Hospital (RGH) for treatment, the victim Aditya’s family members expressed.

After the victim youth was discharged from the health facility earlier in the day, his wife Priyasani Mishra, including Sarojini Behera and lawyer Sadananda Sahu lodged an FIR with Biramitrapur SDPO Manas Ranjan Pradhan seeking justice. They demanded action against the three wrongdoers and reimbursement of the medical expenses incurred by the family.

As per the complaint, the victim Aditya works as a supervisor in a shoe-manufacturing company in Bangalore. He has returned to his native place a few days ago to look after his pregnant wife.

Aditya’s bike had collided with a car on the evening of November 18 while he was returning home after buying milk from Hatibari market. Soon, a few locals hurled abuses at Aditya and attacked him over the incident. A police official who was in civil dress also slapped Aditya.

In order to save himself from the attack, Aditya pushed the cop as he was not aware of the latter’s identity.

Subsequently, Aditya was forcibly taken to the police station and given third-degree torture, said the complaint.

The police officials hit Aditya’s belly, legs and back with a baton. The cops also hurled abuses at Aditya’s wife, who had gone to the police station after hearing about the alleged third-degree torture. The cops threatened both the husband and wife not to reveal the incident to anyone, stated Priyasani.