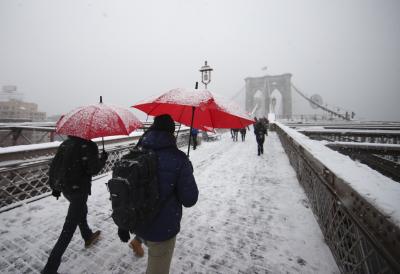 Washington: At least 38 people have died due to a severe Arctic storm that has continued to batter parts of the US and Canada, with some areas recording temperatures as low as -45 degrees Celsius, authorities have confirmed.

Of the 38 victims, 34 were reported across the US, majority of them being in Buffalo, New York, the BBC reported.

New York State Governor Kathy Hochul, a native of Buffalo, said : “This will go down in history as Buffalo’s most devastating storm.”

The other four deaths occurred in Canada when a bus rolled over on an icy road near the town of Merritt, in the western province of British Columbia.

The storm has also left tens of thousands of households in both the countries without electricity.

As of Sunday afternoon, less than 200,000 customers in the US were without power, down from a peak of 1.7 million.

In Canada, the provinces of Ontario and Quebec were the worst affected by the power outages, reports the BBC.

In Quebec, almost 120,000 customers were without electricity as of Sunday, with officials saying that it some could take days for some households to be reconnected.

Meanwhile, thousands of flights have been cancelled and more than 55 million Americans still remain under wind chill alert.

The reach of the blizzard conditions has been unprecedented, stretching from Canada as far south as Texas.

The US state of Montana has been the worst hit by the severe winter storm, with temperatures dropping to -45 degrees Celsius.