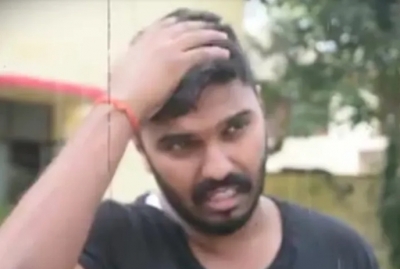 Ranchi: An army officer and his son have been allegedly beaten at a shop here with an iron rod following an argument that took an aggressive turn when they sought GST bill after purchasing firecrackers, the police said on Wednesday.

A complaint in this regard has been filed at a police station by Col. M.K. Singh’s son Ishan Singh in which one Vimal Singhania — a shop owner, has been accused of directing 15-20 people to assault both father and son.

The incident took place on October 24 — on the day of Diwali.

Police said that a cross-FIR has also been filed against the two by an employee of the shop — Trade Friends, located in Kanke Road.

Ishan Singh, in his complaint, mentioned that on seeking a GST bill after purchasing fire-crackers, one of the staff said “no customer is ever provided such bills”.

“When we tried to discuss the matter with the shop supervisor and proprietor Vimal Singhania, around 15-20 people present in the shop began hitting us with shoes and slippers.

“My father who is working in the Indian Army was held captive. And later, we were taken outside on the road where we were hit with iron rod. Both of us sustained injuries in the attack,” the complaint read.

Ishan further said he suffering hearing loss in both ears after the “mob lynching” attempt.

Meanwhile, in the cross-FIR filed by an employee of the shop, it has been mentioned that Col. Singh had sought discount while purchasing fire-crackers.

“We could not offer any discount after which he made some objectionable and casteist remarks,” the complaint stated.

A police officer said an investigation was underway on the basis of FIRs filed by both parties, adding the probe team is also trying to collect the CCTV footage of the incident.