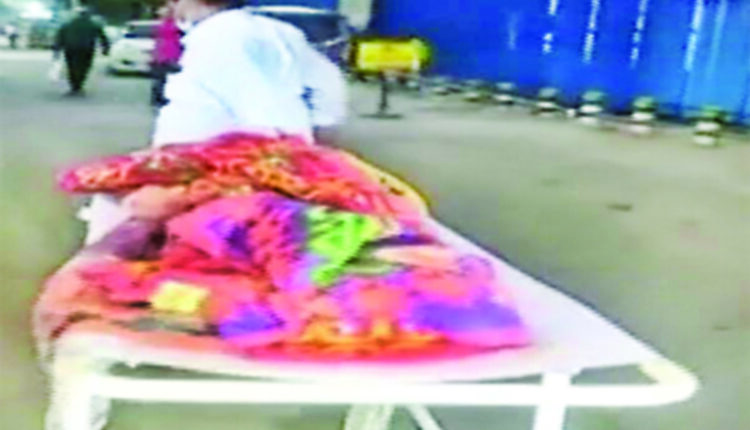 Bhubaneswar: A man had to carry his mother’s body on a stretcher at the Capital Hospital in the city as he was allegedly denied hearse by the staff of the government-run healthcare facility, reports said.

As per information, 82-year-old mother of Manas Bahubalendra of Dagarpada in Khordha district was admitted to the hospital as the elderly woman fell down in bathroom and sustained injuries.

The octogenarian breathed her last on Monday while undergoing treatment at the hospital.

Manas sought a hearse from the hospital authorities under the Mahaprayan Yojana of the state government in order to carry the body to his village. However, the concerned staffers paid no heed.

Moreover, Manas was allegedly asked to pay Rs 5,000 to avail the service. Unable to pay the amount, he decided to carry the body on the stretcher to the village, which is located around 50 km away from the capital city.

Some social workers noticed him on road while he had covered a distance of around 500 metres from the hospital premises with the body being on the stretcher.

They contacted the Private Ambulance Association, following which an ambulance reached the spot. The body was then carried to the village in the vehicle.

The Capital Hospital authorities were yet to comment on the matter.

India, Fiji in talks to set up language lab to promote Hindi