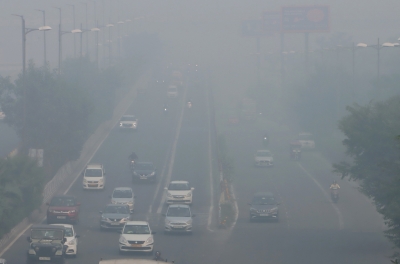 New Delhi: A thick layer of smog continued to cover Delhi on Saturday as the air quality remained under the “severe” category for three consecutive days.

In a slight improvement, Delhi’s Air Quality Index (AQI) was recorded at 431 on Saturday morning, according to data from the System of Air Quality and Weather Forecasting And Research (SAFAR).

The AQI on Friday night deteriorated to 437 from Thursday’s 418, said SAFAR.

Meanwhile, the air quality in Delhi’s adjoining cities of Noida and Gurugram was recorded at 529 and 478, both under the “severe” category.

In the wake of the continued air pollution, Delhi announced the closure of primary schools across the city from Saturday onwards and also banned the entry of trucks, other than the ones carrying essentials, into the national capital.

The government has also constituted a six-member committee to monitor the trucks entering the city.

“Only CNG, Petrol and Electric vehicles will be allowed to enter Delhi. There will also be a ban on medium and heavy vehicles of diesel registered in Delhi, which are not connected to essential services. Small vehicles with diesel engines which are not BS6 compliant will also be banned,” Delhi Environment Minister Gopal Rai has announced on Friday.