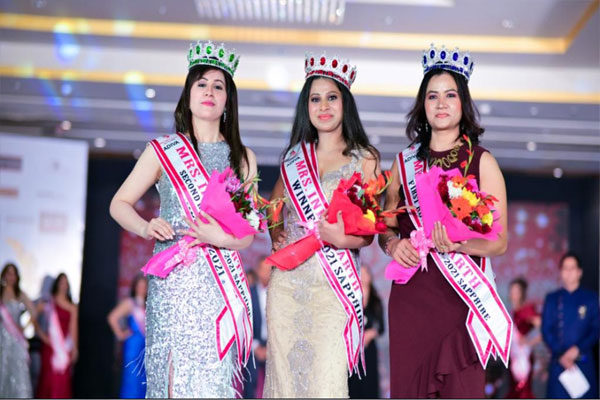 Bhubaneswar: Adding another feather to Odisha’s glory, Rupali Shaw won the title of the first runner up at Mrs India Earth contest held on December 18, 2021 in Delhi. She also won Mrs Charming face in the pageant.

Rupali was among 30 women finalists chosen from across the country and also abroad who went through a series of rounds over a period of 3 days and were judged by some renowned personalities of the country.  She later made it to the top 15 who went for the final Q&A round.

“Mrs India Earth gives a platform to the married women to re-live their dreams and showcase their talents. It gives an opportunity to show to the world that marriage is the beginning of a new and beautiful phase in a woman’s life and that, we still have it in us,” she said.

Narrating her journey as ‘eventful and happy’, Shaw said, “I’m a perfectionist and therefore can focus on one thing at a time and give my 100% to it. For the last 3.5 years I’ve been focusing on my overall health and am a live example of wellness. I want to impart my experience to the people and help them live a good life as I believe in implementing on self before preaching others and hence pursuing wellness coaching now.”

Rupali explained simple living and high thinking is the motto of her life. She further added, “Honesty and optimism are my biggest strengths. Tenacity and resilience define me. I believe that we are blessed with just one life, so try to make the most out of it. Dream big and strive hard to achieve it, my mantra of life.”

Rupali is a BE in Electronics and Instrumentation from NIST, Berhampur. She had worked as an IT professional for eight years before embracing motherhood nine years ago. She’s been a homemaker since then.

Talking about how she found her way to Mrs India Earth contest, Rupali said, “When I saw the advertisement for Mrs. India Earth, I felt like this is my calling. The important thing about this pageant that attracted me the most was its motto, “SAVE THE PLANET”. I was already very compassionate about our mother nature but this gave me the platform to create awareness amongst the people of the world to do their bit without thinking about others as to what they are doing. It’s high time that we wake up, stop playing the blame game and start taking the necessary actions. Climate change is a fact and is very much visible now with unusual floods and draughts. Sky-rocketing prices of the fruits and vegetables are the biggest evidence. According to me, earth belongs to each one of us, so if we as individuals make a little bit of lifestyle changes then we can actually create a huge impact in saving the planet.”

“Women are often written off by the society once they get married. They feel that their lives should revolve around their families alone and in the process they lose their individuality. They keep everyone else before themselves. Their own health and happiness tend to take a backseat. I believe that unless the women of the house are not healthy and happy the family can never stay happily, she added.

Rupali shared a bit about her preparations for the pageant.

“I’d prepared for this pageant very dedicatedly, from selecting the right outfits to showing my creativity in making the props which were eco-friendly as well as showcased my state’s tradition. As I’m an eco-friendly person, I didn’t want to invest in the outfits which I won’t wear more than once. The theme of the traditional round was ‘to go eco-friendly’ so I’d made my jewellery using newspaper and ‘gajra’ using shopping bag. I wanted to show my painting prowess also. So I’d made the traditional art forms of Orissa (Pattachitra and Saura art) and stitched them on a cotton Sambalpuri ‘gamchha’ and used it as a prop. I’m a strong believer of the 3 R’s – Reduce, Reuse and Recycle and therefore created my props using the stuffs available with me and request every individual to follow the same to save our mother nature,” she said.

Rupali Shaw journeyed from being daughter of a mechanical engineer father Aswini Kumar Shaw and homemaker mother Jyoshna Shaw to being wife to a chartered accountant and CFO of Mahindra Accelo, Saroj Kumar Khuntia and a mother of a nine year old son Rishabh.

On winning the titles Mrs India Earth first runner up and Mrs Charming face, she said, “I feel that if I can inspire at least one person and change their life then my mission would be accomplished.”