Ganja worth over Rs 5 lakh seized in Odisha’s Koraput; woman among 3 arrested 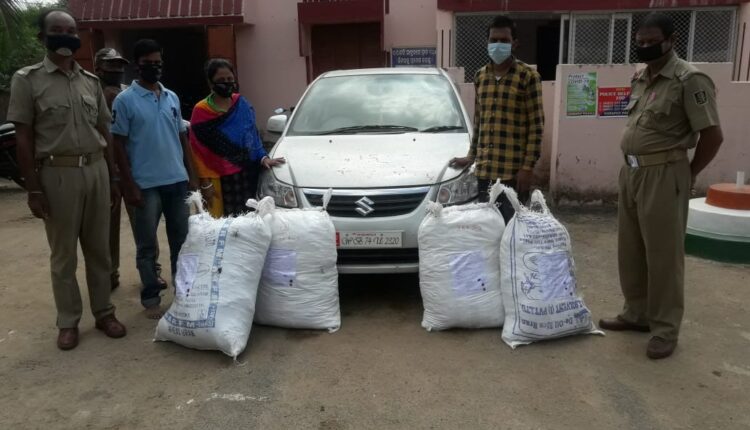 Jeypore: Jeypore Sadar Police arrested three persons including a woman and seized huge cache of ganja worth over Rs 5 lakh from their possession here in Odisha’s Koraput district.

The accused persons have been identified as Arvind Kumar (28), Komal Sonar (32) and Shilpi Acharee (38). While Arvind is a resident of Buxar district in Bihar, Komal and Shilpi hail from Assam.

The arrest and seizure were made during a raid near Patraput bridge on Friday.

According to reports, the ganja was illegally being transported by three persons including a woman in a car bearing a registration number of West Bengal from Lamptaput area in Koraput district.

Acting on a tip-off at 11.30 am on July 31, a team of police led by OIC Aditya Mahakur proceeded to Patraput bridge and intercepted the vehicle. They detained 3 suspected persons and searched the car as per the procedure in presence of the Executive Magistrate and other witnesses. During the search, the police seized 22 number of packets with ganja that weighed at 112.800 kg. The total cost of the banned contraband is about Rs 5.50 lakh, Jeypore Sadar Police said in a press release yesterday.

Besides, the police also seized 4 mobile phones, Rs 550 cash and the car, which was used by the accused persons in transporting ganja.

Police said that the ganja was being supplied by the mastermind identified as Alex Christiano alias Happy and his two associates — Sunadhar Pangi alias Samir and Upendra Pangi — of Lamtaput area. They are yet to be arrested.

However, the continuous raids are being conducted to nab the absconding suspects as soon as possible, the release stated.

Microsoft in talks to buy TikTok’s US operations: Report

Cannabis worth over Rs 2 crore seized in different parts of…